Trying to be smart could be just dumb

Holy cow, I hope I didn’t screw myself by trying to spread apart the plant a week ago to let more light and air into the middle of the plant.

I added a couple bamboo supports thinking I was smart, but now I might have major issues

Here is the plant: 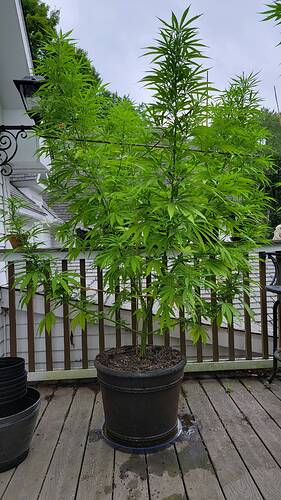 Here are the cross supports i added to spread main stems away from each other: 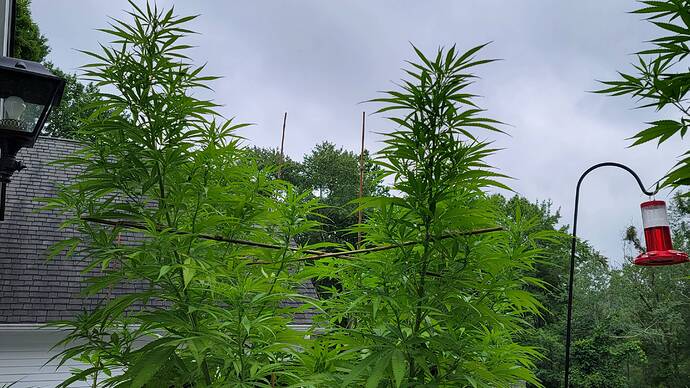 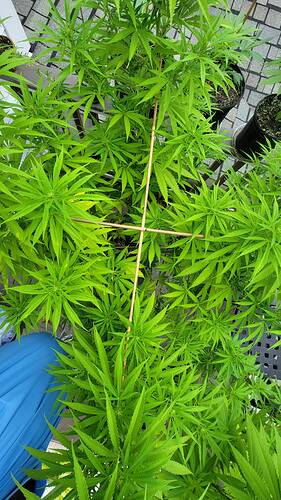 Here is the resulting damage revealing itself a week later: 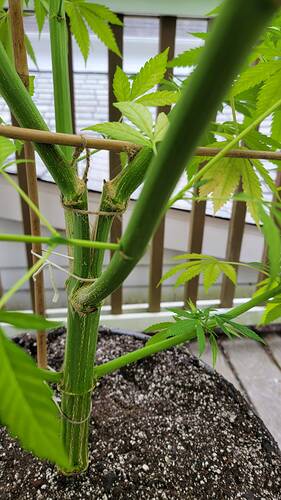 Any thoughts on what to do or how to repair the situation?

Should I tape up the split stem/trunk tightly back together?

I hope the plant won’t die now. @CurrDogg420 have you ever seen something like this?

I did the same thing, & wrapped it in that stretchy tape that is used on sprains etc, it healed fine. I did notice mine right away as i heard the crack, It is best to go a little at a time with training & also easier when the plant is thirsty & branches are a bit more flexible, i would try to close up the fracture & wrap it, just relax the bamboo a bit.

Thanks for assessment of the situation.

Stem split. It happens, especially if you do some heavy training after the stems have become woody. The best time for training is early on when the stems are still bendy - you can shape them almost any way you want if you start early. Or like Mike said, if they get droopy from thirst.

Ive got a blue cheese with a split. Been like that for a couple weeks and it seems fine. Growing just as fast as her sisters. I did remove the ties for a few days but they’re back on there now.

The size of your plant is much larger than mine, and you’re outdoors, so it might cause you more trouble than me. I think I’d leave that bamboo support in there - not for spreading out more, but for sort of keeping it all together now. Especially if you can’t bring it back together completely with the tape.

Just tried the taping job, and the trunk was pretty thick and the split wouldn’t come all the way back together, bummer. I’ll just try to reinforced it better and cross my fingers that the plant just continues moving along through its life cycle and gives me some sort of decent results.

Atleast I now learned what training means and when to do it. Thanks for the Info

@GolfWeedGuy done it more than a few times, it happens, catch it early enough you can use gardeners tape, spray some diluted aloe h2o in the wound then tape it up., usually heals. But once it gets woody it is what it is. Might affect total yield, but these things (cannabis plants) grow like a “WeeD”… Endure They Do! You could try to seal it tighter as if it was “together”. It could be a time to consider “Air Layering”…

Years ago we used to drill a hole in the base of the stem, insert a chopstick and tape above and below the chopstick. It is much like Kyles chiropractics…we believed it increase potency / bud growth
Just tape her closed…and do not worry, she will heal…do not use tape with glue…use just a wrapping / hose repair tape or gauze and tape around the gauze

They are pretty hardy. I think you’ll be fine because the whole plant isn’t wilting from that. I have actually grafted completely broken off branches right back onto the plant. With good success. Tape that up like suggested by Mike S and currdogg. Or just wrap/pull it tight with strings ( like kite string diameter string) so that they touch together as much of the wound as possible. Like how you would lash in arrowhead onto a stick with string, or how you lash the lead poles when you build a Teepee.The rest will scar up and heal.

If the plant isn’t wilting and the first tape seems good, maybe just do nothing more at all see what happens.

I know it was a different thread but:
you asked how to keep the plants smaller. I think doing lots more pruning while the plants are small before the stems get woody is THE MOST helpful to control size. Just remember when you prune aggressively, every time you prune you’re going to get lots of side branches. I’ve seen plants growing 20- 40 side branches after I keep them bonsai all winter with continual weekly topping. You just have to control all those side branches so you only have six or seven and not let the 20 to 40 grow. But that plant will stay nice and short. You could probably keep it under 12 inches (mini box grow technique) with the aggressive topping. Once they switch to flower the stretch is minimized relative to veg growth (some landrace or heavy Sativa crosses will keep on stretching anyway but not the hybrids that are most common).

And then more incremental repotting rather than a big pot. I Actually start in three or 4 inch pots, go to pint pots, go to half gallon, and then go to 1 gallons etc. Some plants need to go up to 10 or 15 gallon pots. Some do not need anything bigger than 1 to 3 gallon. It really just depends on the strain. Keep a log so you know how to to handle them next time. Grow log is a must if you want to improve growing!! 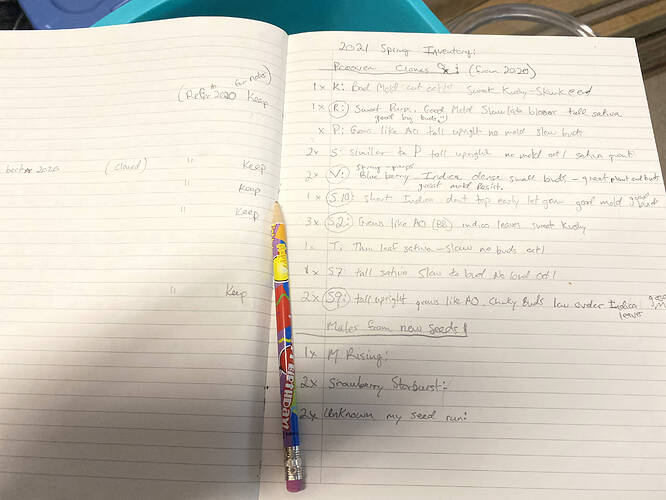 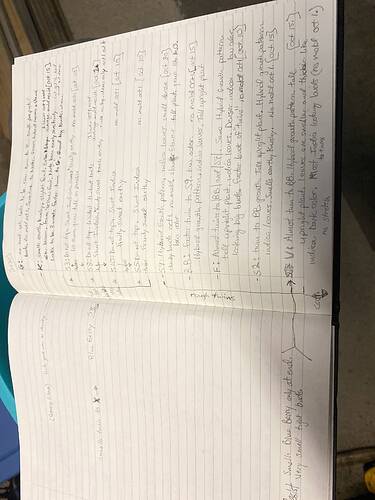 image3024×4032 940 KB
Once againI don’t re-pot until the plant starts to look root bound in the bottom. If I’m not sure I will even gently slide a plant out of a pot to see how the roots look. Even if I have no intention of repotting it right then and there. A vegetative plant won’t skip a beat growing if gently checking the roots. I do not recommend doing that to flowering plants though. I would not repot a plant that did not get the effects you first described in your initial post (deficiencies), especially if it’s ok in a 3 gal. I have grown many big trees in just 3 gal pots.

Lastly, put them out later. I have sprouted seed 2 weeks before the solstice that still get huge in smaller pots. The longer I grow I have been putting plants out later to have to top less (just lazy I guess). But then they are less likely to root bind or need repot or more nutrient feeds because they are younger plants. The only time I put plants out early (in April or early may) is to sex them early because they start to flower. (Sorry to tangent, that’s a different topic). You get the idea.

…Next time if you’re staking up those lower branches with bamboo sticks. I like to perforate the pot high on the side. Keep the hole small so the bamboo stake doesn’t slide out too easy. Then you can slide it in at an angle and the pot will help support it. Especially if you make your perforation a steep downward angle. The pot will support the bamboo steaks to a steeper angle (than in the soil alone). That will hold up those side branches from drooping/break off from bud weight.

The other way I do it, especially on a plant that tall and vigorous. I would take some hemp or kite string and first attach it to the main stem of the plant. Maybe 12 or 18 inches above the midpoint of those little side branches. Then I will tie string to the midpoint of the side branches and pull back with just enough tension that they barely raise up their angle from the ground. Then as a plant grows up it’ll keep pulling itself up along with it if that makes sense.

Hi Mike, thanks for the tip, I used gauze and tape. We’ll see what happens

Hi Dwight, that’s one heck of a log book, awesome!

I went with the gauze and tape, hopefully it foes the trick.

Also thanks for the plant size tips I’ll definitely learn to prune better and more regularly to control the size, and I’ll go 3 gallon max in the future, tha KS for the tips.

Thanks again for more good information, perforating the pot to fit bamboo stakes at a wider angle is a great Idea, I’ll definitely do that in the future as well.

@GolfWeedGuy they’ll be fine. They’re already starting to knot up and close. Just keep them covered and clean and they’ll end up giving you some massive colas. Lol

Break out the mason jars!!!

Here is the temporary tape job. I only had thin tape and a little gauze. 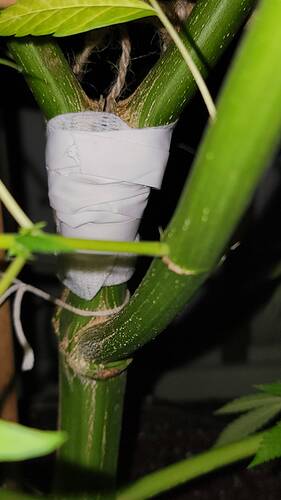 The trunk is tough, I would need vice grips to hold that split together.

@GolfWeedGuy another option is to tape the branches right above the split and then use twine like a tourniquet to pull it together.

The tape keeps the twine from cutting into the branches. Just wrap the twine around one branch, then do a single loop around a stick or an object to use as a lever, and then you wrap the other branch and tie it off.

Then you twist the stick/lever in the middle and as you twist it it will pull the sides together. Once you have it where you want it tie or tape off the lever.

Yep, you just can’t get the leverage to bring it together only at the base - without that bamboo bringing the tops back together. She’s a big girl.

@GolfWeedGuy She’s getting hungry. She’s doing more photosynthesis too after you opened her up. You just pressed the gas pedal down a bit.

If you’re going to try to ride it out in that pot you’ll want to fertilize like now. If you want to stick with the soil type grow I would top dress with some 4-8-4 and bone meal and worm castings for a microbial boost. Also some mycorrhizae.

Oh man, that sounds like greek to me. I need the fertilizer for Dummies mix. Is there one product to buy that has all those characteristics?

And is dummy proof…

Sorry lol - you can probably skip the mycorrhizae part.

The organic dry fertilizer, bone meal, and worm castings can probably be found at most of your local garden centers. Certainly online. If you have good compost you could use it in place of the worm castings. But if you’re gonna buy compost, worm castings is the top of the food chain.

Your soil is getting a bit depleted IMO. You could sorta add back some of the vitamins and minerals you had going for you with these ingredients.

Follow the directions on the box/bag for the amounts. Dump it in there, scratch it in a bit and then water it in.

I do have a garden / hydro shop near by, I’ll ask them for those ingredients and some advice on how much to use. Thanks again @CurrDogg420