Shouldn't CO2 be going down?

I have 6 plants 6 weeks into grow. Here is an image of today’s CO2 level: 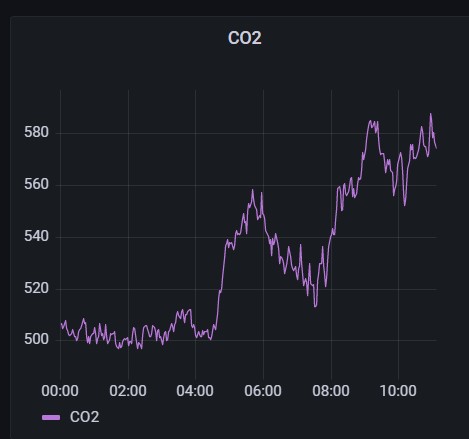 I do not enrich with CO2. At 5AM the lights turn on. When they do, the CO2 level goes from around 500 to 580 and continues to dance around that value during the day. I expected the CO2 level to decline based on the plant’s stomata sucking up the CO2. So the chart showing the CO2 going up and then not going down puzzles me. So why isn’t the amount of CO2 much lower than 500 if the leaves are sucking it up?

@solarslurpie Are these readings consistent over several days? Or is this a regular looking graph?

From Encyclopedia Britannica… While most plants release oxygen during the day as part of photosynthesis, small amounts of carbon dioxide are emitted both day and night as a by-product of cellular respiration, The majority of plants also absorb carbon dioxide during the day for photosynthesis, and do so in greater amounts than what is released for cellular respiration.
The exception to this general rule are the plants (mostly cacti, bromeliads, and certain succulents) that rely on CAM photosynthesis and keep their leaf stomata closed during the day to reduce water loss. These plants do release some oxygen at night when the stomata open and the oxygen can escape.

Unless your intake is drawing in CO2 enriched air? Does look backwards tho!

Thank you for the reply @Spudgunner. It seems it’s a constant thing. At night CO2 hovers at around 500 ppm. During the day, around 580ppm. The air is not enriched. I must be missing something…hmmm…like the ability to think…hmmm…

@solarslurpie what are your temps, rh, substrate, etc?

There are a few reasons for why this can happen.

@solarslurpie if everything is in range such as temperature and rh and you plants are healthy it’s likely you have a colony of photosynthetic bacteria or some c02 producing fungus in your soil if you’re growing organic and used any inoculates or certain types of bokashi bran.

Lactobacilli are common in ferments and can increase c02 levels markedly but they can also make the organic substrate acidic. Down to 3.5 even if the colonies grow out of control. They’re good for the soil and plants though because they keep other bacteria and fungi away, but if you feed them and they breed too much they can become an issue. They produce a lot of lactic acid as well as h202 and acetic acid as they eat sugars and ferment and break down organic matter in the soil.

Test your soil pH. If it’s abnormally low it could be the bacterium. Stop feeding with sugars for a bit if you use them and let the bacteria levels level out and your pH should come back up and you can start using sugars again.

If your pH is good though and plants are healthy leave them be and let them do their thing.

@MDBuds As always, thank you for your reply. You are incredibly helpful. I’ll check the pH.

In the mean time, I completely enjoy the geek side of things…so I’m building my grow dashboard…

I’ve been adjusting the humidity by turning on/off a humidifier based on my vpd calculation. Sadly, I don’t use a PID method - just turn on when vpd is too high, off when too low. Until I get a better method implemented for on/off there is all this on / off. I combine temp/humidity/vpd on what chart. 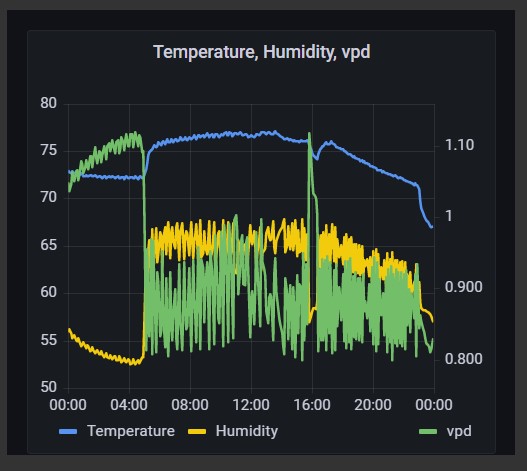 Do your intake fans come on during the day, off at night? It would be bringing in fresh co2 even if it draws from a lung room/interior home air and not directly outside….

Does the graph spike match the switch points for the fan on?

Thank you @Noddykitty … you know what I think it is given your comment? I made the grow tent. I did my best to fully seal. But it is not. I think what I am seeing is an artifact of the outside air coming in. At night, the CO2 is low. No one is near the plants. During the day, there are people around the plants. OH. I should have thought of that!

Thank you. Everyone is very helpful.