I’m putting large amounts of water into a 10 gallon container and I just don’t know how much water I’m supposed to be putting in. Some of the larger shade leaves are beginning to yellow, And I’m wondering if I need to change watering or nutrients I currently don’t use any nutrients just plain water the soil I’m using is supposed to be from seed to harvest soil.

Do nit water everyday. They need to use what you give them. My opiniin only but water matbe every 3 days for a bit and see hiw it goes

Thanks John, I’ll stop watering for a couple days and see how it looks. I was just wondering if the plants already ate up all the nutrients in the soil. Hoping I don’t need to do any nutrient stuff since I’m a newbie.

Here is a pic 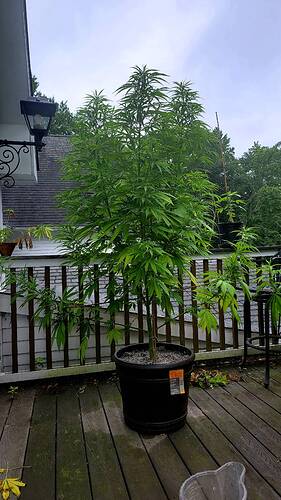 In my estimation she’s outgrown that plastic pot. Rule of thumb is double the size of the pot when transplanting. Get her a 25 gallon fabric.

If it were me at this stage I would start giving them cal mag every other watering. You can get it on amazon. They are pre-flower so they will start needing nutrients. There are other things but this will help nutrient needs during flower. You could use bat guano dosed right it is good for a month per dose. You can also find ut on amazon. Dr. Earths bat guano. Both products have instructions on them. Both are inexpensive and easy to use. Grow well

Thanks currdogg, don’t know why I didn’t think about that, I thought 10Gallon was huge when I got it, now it seems small.

How long has that plant been growing and what region of the country do you live in?

Since about May, in the Northeast. I bought the all American mix pack. But I mixed up the dang seeds so I’m not even sure which one it is. Rookie mistake I’m sure.

I’m debating doing a transplant into a 25 gallon with some new soil. Also going to try watering it once every 3 days because I’m not sure if I’ve been over watering it. I’ve been watering it everyday fairly heavily up until now.

I almost bought that pack a couple of times.

I’ve got some NYC diesel in week 8 of flower and these are the biggest buds I’ve seen in my life. But the one I really want to try for outdoors is that tropical cross one.

In terms of water, I like like to water when dry. I usually lift up the pot and get a feel for the weight but that’s obviously going to be a heavy lift in your case so I don’t know if I’d recommend that. For the size of that plant vs the size of the pot I’d kinda be expecting to have to water every day if it hasn’t rained.

Transplanting her if you decide to is gonna be an operation for sure. I usually like to do it a couple hours after I’ve watered it in but in your case I think I’d wait until it was dry to make the weight more manageable.

I made a post about transplanting but you’ll obviously have to scale things up. Maybe put her up on a table when you try to get her out of the pot.

How to Transplant your plant Plant Care

If you’re growing photoperiod plants, it makes sense to keep them in the “right size” pot. This will make watering and the feeding process much simpler. The right size pot for you will depend on what you have available and what size plants you’re trying to grow. When transplanting, a general rule of thumb is to double the size of the pot. I start in 4” pots - solo cup size. After that, I have some 1.5 gallon “training” pots where I’ve drilled holes along the rim for tying branches down. I’ve a…

I’m no professional cultivator, but one thing that has made a huge impression on me is doing less to the plants. Plants really do know how to care for themselves for the most part when growing in soil. I tend to the soil as an important detail since the roots are the most vital part of the plant. Your plant looks splendid! Personally, I go for short, bushy plants and choose my strains accordingly. I was just curious. It appears you are caring for her well. Keep up the good work.

And welcome to our little community! Looking forward to some pics!

My girls have to work if they want to eat. I only use worm castings (I’d use good compost if I had it) and organic fertilizer for nutes. I won’t add any additional sugars because that’s what photosynthesis is for. The plant feeds the microbiology in the soil which feeds the plant. It’s beautiful.

Thanks for all the tips @KinglyLife1 and @CurrDogg420. I like the idea that less is more.

We’ll see how it all turns out. Not sure when the flowering will start. Then not sure what to do when that happens either. Lots to see and learn. Trial and error for me during this first attempt.

If this is your first Grow and your plant is that healthy, you’re not in a bad place. At this stage, you’ll probably have a bit of a wait since it is a photoperiod plant. Maybe later September, or some time in October. When is the Best Time to Harvest Marijuana Buds? | Grow Weed Easy

It’s a big lovely plant nice job. If I were to grow that exact same plant the following year these are the things I would change.

1: I would start it in a smaller pot and do more incremental re-pot so it doesn’t grow so damn big so fast. (If you did this all ready then awesome).

2: I would try to start it maybe a little later in the season so it doesn’t grow so tall so fast. I have noticed the last four or five seasons I’ve been putting my plants out just a little later so I don’t have to top them quite so much during the vegetative stage.

3: And lastly I would definitely top it around 12 inches so that big girl bushes out and doesn’t grow into it such a big Christmas tree. One (or 3) big top bud is always more likely to get mold than an even top bunch of bush like branches. I would’ve tried to push a plant that tall out into six or 12 lead branches. If I top it and it only gives me three I will top it again in the next week. And doing that lower top while the plant is younger will keep that whole bush from getting quite so tall and needing such a big pot in the end. I also like currdogd’s suggestion of switching to a fabric pot. One of the best advantages of the fabric pots is you can get away with the smaller pot. With the air pruning of the roots they don’t root bind so tight and need to be upsized so frequently as an a classic solid pot. Otherwise it’s a lovely plant. Just a real big motherfucker from somebody who likes to grow them tall myself.

If you do repot it again I may humbly suggest to still top the 3 lead shoots. Just a node shave down, don’t hack it. Otherwise after a good re-pot it may just start stretching again with all the root space. If you cut the three leader branches tops its more likely to settle down and switch to the flowering. Basically you want to traumatize those tops so they’ll stop stretching. Make it switch gears and start flowering. This has worked well for me and stretch monsters that should’ve approached flowering for me in the past.

The first run of a new plant is like the first date. The second year of running the same plant is a relationship. You learn from how it grows.

Sorry I didn’t notice in the first post. I would put some bamboo steaks on those lower horizontal branches. If you want to keep them. Otherwise they will totally snap off as soon as u get a little bud weight on them. They will break near the main stem where it gets woody. Happens every time. Since it’s one plant I would definitely steak them. If I had multiple plants I would just cut those off. I would definitely stake them soon or put some strings on them reaching up to hold them up to the main stem.

Thanks for all the great advice @Noddykitty . I’ll stake up those bottoms branches asap

Is it hot there? If it is not hot, as in over 100 degrees F, stop the daily watering. If you plant needs water it will tell you with droopy leaves. Make sure you don’t have a saltwater softening system in the water supply you are using. You need to give the plant some ferts. Don’t go crazy and give it more fertilizers and don’t fert every day.

Thanks for the advice, I’ll keep on the look out for droopy leaves. Water is from well and no softener system. The plant seems to soak up all the water I give it, but I’ll look for droopy leaves as an indicator. I’m nervous about fertilizers, I don’t want to do it wrong and accidently kill the plant.