Friends, comrades, brothers and sisters, when I first started smoking marijuana, a few short years before they discovered electricity, there weren’t many “named” strains, but there were a few. Panama Red, Acapulco Gold, and not many more. You old timers remember separating the seeds from the smoke on the cover of Their Satanic Majesty’s Request?

My favorite strain was Jamaican Lamb’s Breath. For some reason, Leafly has a Lamb’s Bread strain listed, but not Lamb’s Breath. I suspect it’s the same strain and the name has morphed over time, but my oldest brother came back from Jamaica in 1975 (before I had ever touched joint to lip) and that is where he encountered it the first time and Lamb’s Breath was the name. The flowers tended to be small, twiggy, leggy, and a very dark brown. The name came from the aroma of the flowers. I think I’ll see if I can find some seeds of it somewhere.

UPDATE: I didn’t read the Leafly article, just did a search on the name. In the article you find that both names apply. See? I’m NOT suffering from dementia…yet.

So how about it, fellow old timers? What’s your favorite old time strain?

Back in the ‘70’s we enjoyed “location” strains as you mentioned above. Along with the couple you mentioned, there were Thai sticks, Oaxacan, Maui Wowie, blond Lebanese hashish and my personal favorite, Columbian Gold, which is in my regular grow rotation
Here’s a pic of some recent CG 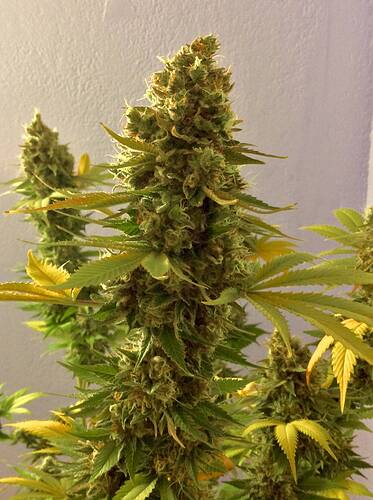 I forgot some of those (but not all). Thank you for the memories.

That plant is looking beautiful, but I really like the lighting and photography of it.

I was in the Canal Zone 81-84 I smoked Panama red and Columbian gold on the regular. Got spoiled cause I came home to Mexican brick weed everywhere. Till Krypto came to be.

Columbian gold and Oaxacan were my favs. But I did love the Thai stick

Ooo- Boomer party! I have fond memories of “Barefoot in the Snow OG” - that one was super frosty. And who could forget “Uphill Both Ways”: one of the first hybrids.

I used to smoke them before school. My kids overheard me talking about it one day so I came up with a bullshit story about not having shoes!

Air Force in California in the seventies was a great place to experience exotic imports that may or may not have come back directly from SE Asia and magically found its way into the off base party circuit. It was there I first experienced the magic of seedless weed we paid a whole $75/oz for, which was twice what we paid for real Thai sticks….

Skunk, White widow, Northern lights and brick weed for me!, and a rare strain that is still unknown atleast for I. Had seeds but was some of the best shit I ever smoked, yet I was just starting, so tolerance wasn’t built yet., Actually seen a portal like Stargate from that shit.

I also grew up in the era of “commercial” brick weed. I remember my first bag of Skunk: I got it from this guy who I was taking guitar lessons from. I literally thought he must have been carrying it in his armpit on the way over. I never did end up learning to play - lost the motivation for some reason….

I see where your motivation went @CurrDogg420 lol

Honestly, as my brother, who was known for growing wicked sticky, potent bud, such that if a joint went around at a party, people would know it was his before they’d even seen him, as he used to say, if weed passed through five hands, it would get named six times. To him, there was brick or otherwise no name “typical Mex… cr.p”, fancy California crap, and his own carefully crossed and recrossed bag seed miracles he cultivated for twenty years.

In the underground markets around here, one still rarely sees anything hand trimmed, or with visibly identifiable plant parts. It’s usually that featureless machine processed green lava rock looking crap, no matter what they call it.

By the time I started puffin - late 80’s. it was typically “sexy Mexi” or brick weed floating around here, Mostly the Sexy Mexi stuff. But some of the gems I recall getting my hands on back then - some real deal Turkish Hash, tasted just like a Crayola crayon. Northern Lights was a staple in the Northeast for “kind buds.” Then came the “beasters” and “Jerry Berries” period. And then few years later we started seeing things like The Cough, Strawberry Cough, F5 Blueberry, Super Skunk, Banana OG, Neville Haze and the likes of some of the finest strains on planet earth. Always wanted to get into growing but never had the time or desire to deal with the law side of that but now that it’s legal here in NY, I’m stoked to get to trying my hand at something I haver always wanted to do and something I LOVE to enjoy.

But two buds in my life stand out to me, the second one is what I believe was Acapulco Gold. The entire bud had a golden hue through it and wasn’t really green and it was one bud that weighed in at 7 grams. I would bust a piece off this, pack it, hit it and cough my fucking brains out for 20 min’s - EVERY TIME. The high was intense and cerebral and would just fucking whack you. I picked that up for my honeymoon. A buddie of mine used to call shit like that The Goonies. So I always knew if he said he had The Goonies this would be lights out. I believe it came off Phish tour - late 90’s.

And number one - which is still in leagues that I’ve yet to see from anything other than psychedelic’s. A buddie I went to HS with stopped by the gas station I worked at one night. He handed me a bud about 2" tall and a little scraggly looking. Now there’s an entire story that goes with this as I gave the bud to some buddies who were supposed to come back and catch me one - well hours and hours later - they did - and Holy shit, that is the only time I was spun from smoking weed. My other buddie had a 3’ Graphix and packed a tiny little piece of bud, I said give me that thing and his response was - “you’re not gonna want more than that, trust me.” Well I put a little more than that in the tube, ripped it down, rolled it around my mouth, out my nose and then exhaled - didn’t taste like much, didn’t smell like much, surely did not look like much but when they say looks can be deceiving, well, they were talking about this shit right here, Lol. To this day I have yet to smoke anything that is even remotely in this ball park.

I finished my shift - the whole time - we had a dark grey LED screen with black numbers - I couldn’t read it at all, so I improvised and asked everyone what they had. As I was standing at the window I couldn’t even make out features on faces just blotches of color and shit. I was fucked UP! When my boss showed up I told him - he’s cool like that, even shared with him some of this bud with the advice don’t smoke it till you got a few hours with nothing to do. Well, he goes back out on his run to check prices and picks me up almost $20 in food from Mc.D’s - this is 1994 - you could get a ton of food for $20 back then. I ate it all, then decided I would go home, well I got in my car, pulled out the furthest exit and pulled right back in the first entrance and pulled up behind the kiosk, parked and went back in. I was WAY too high to drive the 1.2 miles to my house, lol. Off one bong rip. So I worked outside selling premium for about 2 more hours till I felt I could drive - and I white knuckled the whole 1.2 miles home. Got out, kissed the ground - no shit. went inside and ate 2 eggs, a piece of steak, a bowl of cereal and 4 pieces of toast before going upstairs to bed. I woke up about 8.5 hours later and I was STILL HIGH.

Took a shower, went to the bar and had a couple drinks and mellowed out before heading off to work that night. And that’s a True Story. On my soul. You’re talking 2 very glutenous meals, 8+ hours sleep and still being LIT.

Now I would run into my buddie again - this sold for $80 an 1/8th in the early/mid 90’s when an 1/8th was $20 and I could buy an Oz of brick for that. I was told it was a Thai strain. To this day I have no idea if that is true - he is still around here, we haven’t crossed paths in many years, but this topic will be discussed when we do. In my more grown up, educated research I have looked into Thai weed to see if this could be true as I was told years ago it was one of the only strains on earth with psychedelic abilities when smoked and it seems possible, but I’ve yet to encounter anything even remotely close to this shit since.

Seems to be a lot of old schoolers here, what are your thoughts? Possible? Or have we been had with some laced weed?

In the eighties, pcp dusted weed was often passed off as designer label stuff

@Northcountryguy ya, angel dust weed. Had to be careful where you bought your weed in the old days. I remember Mexican brick weed was popular before I puffed (older bro and sis smoked it tho), at least until they started spraying paraquat in the 70’s. Then it was the Columbian. Hawaiian was always a treat, but at $300/oz, expensive and rarely available.

Strains are so much better today. Back then, top strains probably maxed at at 10% THC. It wasn’t until around '91 or '92 that I heard a strain hit the 20% mark. I’m looking forward now!

Never knowingly smoked any herb laced w/ PCP. So possibly. Have unknowingly smoked shit that was sno-capped and it certainly did not have anything remotely close to that effect. This dude is stand up so I can’t see him lacing shit, nut we we’re kids still so anything is possible. Lol.

You old timers remember separating the seeds from the smoke on the cover of Their Satanic Majesty’s Request?

Album covers really came in handy!
I remember using “Dark Side of the Moon” quite a bit whilst rolling joints

I miss Nepalese Kush, Sweet Tooth, and God’s Gift. The White Widow of today neither looks nor tastes at all like the original.

I smoked my first joint in the summer of 1969. Mexican. Special were Acapulco Gold and Colombian. I did have Thai stick when someone could get it, maybe twice. Lebanese hash would come around, as would Afghani on occasion. $15 for an ounce of grass, $5 for a gram of hash. In 1973, I went to Nepal, where a government store had lots of goodies. But being on a tight budget, I mostly smoked seedy buds and leaves off a plant I found growing wild by a river. Two years later, in Northern Thailand, I got a rickshaw driver who pedaled me out in the countryside and got me a half ounce or so. Mailed seeds home, but customs caught them, all I received was a receipt for confiscated “marihuana”. Ever since, I have traveled to weed cultures around the world, including a 6 month stint working in Amsterdam.