My roots are starting to pop out the bottom of my 5 gal fabric pots. I totally didn’t expect this to happen so soon! At about a week under 2 months in veg from seed. So I just ordered some 15 gal pots and a bunch of soil and bat guano and worm castings to mix up and transplant.

My question / problem is it will take 4 days 3 nights from now to receive all products ordered… I noticed the bottom big fan leaves have been dying the past few days and was looking for pest or disease. Looked under today and saw a decent amount of roots penetrating thru with only 1cm max out.

Anyone experience having to wait 5 days to transplant after finding this out? I figure worst case Ill get the soil delivered late on the 4th day.

Just lightly watered them tonight after throwing 4 red solo cups of worm castings under each pot for roots to have a medium to grow into in hopes of creating a healthier environment for penetrating roots.

Will try and get some photos tomorrow as its 3am rn.

Anyhow, Im kicking myself for not buying everything earlier. I live near no hydroponic stores and everything had to be amazon’d haha.Excited I decided on the 15gals vs 10gal which i was originally thinking. My reasoning is I plan to veg for 2 more months exactly from now then switching to flower on 420.

I figure the 15 should be perfect timing to avoid root bound in flower! in worst case scenerio Ill throw a foot of soil at the bottom of my tent and set 15gal’s ontop of the soil for roots to have something a little deeper to penetrate… HOPE to avoid that! But again, anyone have experience trying this?

I would not worry too much about the extra time for your materials to arrive. That short of time should not matter. I always see a few roots poke out the bottoms of the grow bags. The bottoms don’t always airprune the root balls as well as the sides because they are lacking in air. Raising up the pots on a couple of shims (sticks, plastic pvc pipes, etc) would help get more air under the pots for air pruning effect. But honestly I would not worry about it. When you repot roll down the old pot down the sides. Like a reverse condom. So you minimize damaging the roots. Honestly, I would leave 1-2 plants in the 5 gal pots to see how they do. 15 gal is getting pretty big for indoor grow. Airprunning is supposed to prevent severe root bound plants. It’s the whole point of the grow bags.

That seems like a long veg time too for indoor. How tall is your space? They are going to stretch during flower also. You would better off with smaller plants if the bigger ones get too tall for the space. I might suggest turning them to flower now, or sooner than 420. How tall are they now? How much overhead space is left?

Grow bags do dryout much quicker than traditional pots. Especially if the air is moving well with fans. Once dry, the dirt gets hydrophobic and the water can run down the sides and miss the roots. When this happens I just dunk the pot and plant in a bucket to ensure the water penetrates the root ball and soil. Without the pics any other reasons would be a guess as to why the sun leaves are drying out on you. Be it pest or nutrients or ph.

I would NOT put any substrate on the floor of the tent under the pots. It would definitely increase your risk for pests. Or mold if it got too wet on an accidental over water. Spider mites always love a dirty dusty floor too.

So I’ve topped and LST tie down on them. I’ve still got tons of space in the tent. I feel that I lost about a months worth of grow as my PH was too high after adding dolomite lime to their 2 gal pots after red solo cups as babys. I put around 1/3 dolomite lime into the soil and was watering with 7.5ph water… Super noob move.

They are heavy indica plants so I dont suspect them to grow too tall. Ive got x3 Bubba’s Pupil (as seen in the pots with yellow stitching; back left is the happiest, the middle left I tried cutting big fan leaves off soon after topping thinking it’d allow larger growth and was wrong, and the forward right one always had huge wide leaves from the day it sprouted), x2 Sundae Driver (The big one in the middle and the front one), and x1 Medi-Pak 1:1 cbd/thc sativa in the back right corner. You cant tell but Ive got 3 clip fans running on them all. Just added the 3rd tonight.

Ive only had “earth juice ph down” for the last 2 watering cycles which were on tuesday the 16th (at 6pm) and saturday the 20th (at 1:24am) where I ph’d the water to 5.75 and only used 1/6th of the amount I usually use… This wasnt initially on purpose as my PH reader went out after lowering the first feed so I decided to split it upon them all until my new reader came in.

I noticed even though it was like 1 1/2 inches of moisture with 1/6th feed they responded very well. Im not sure if it was just the ph being corrected or the fact that they dont actually need to be watered till you can see run off every time you water. I observed that the 1 1/2 inches of moisture seemed to creep down consistently day by day till it reached the bottom of the pot in 3/4ish days.

I believe I was over watering them with high ph for the first 2 months so i hope to make up for lost time. 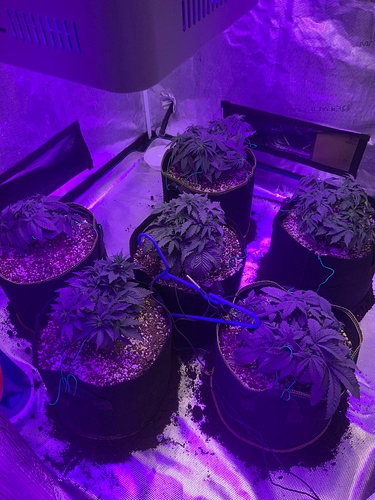 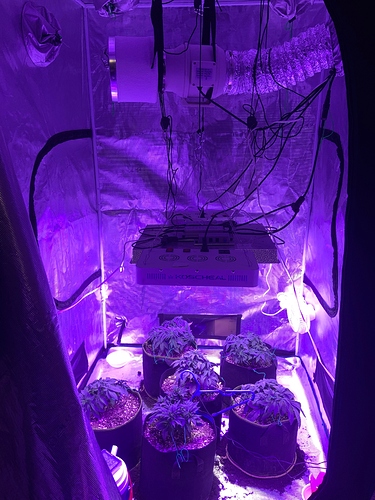 … I am starting to wonder how 15 gal will do as I was originally going to do 10 gal … and according to my planner I was going to switch to flower March 1st. They definitely dont look ready to switch to flower imo. I guess I gotta ride it out as a longer veg will be beneficial for a larger yield.

No you’re absolutely right. As in they need to grow a little more vegetative. High ph will totally stunt the growth and keep the nutrients in the roots locked up.i glad you caught it and fixed it. I bet you don’t need to go to April though. I bet just a couple weeks will be enough. If You do a re pot I suggest not cutting the roots up too bad just roll the pots down carefully. I would do the 10gal over the 15gal if you have both.

Even if you go with the 15gal I would leave at least two of the plants in the pots you have now. Just for the sake of experiment. Those grow bags really airprune. Don’t go by the bottoms. Sometimes those smaller pots make all the difference in head room to finish the buds. Once they’re happy they can grow 12 inches in a week easily in veg.

If they veg to more than half the space definitely flip them. You got to run a strain A few times to figure out it’s stretch. Some strains have a reputation for it, some don’t. The individual stretch can show differently in seed packs sisters.

Yeah, luckily before they actually hit maturity to veg from seedling the ph didnt effect their early growth. Ive only got the 15 gal just got them yesterday waiting on all my soil. Ive got enough soil for the 15’s so Im gonna try and run with all 15. May be a little overkill but I like the idea of consistency. It looks like there will be well more than enough space for them. I may flip to flower April 1st instead of 20th as I was originally planning to do it March 1st. Ill keep an update going.

Well make sure to share pictures after they get pretty. If they end up afterwards getting too tall. Try just the 5s next. Or if one becomes a stretch monster. Tame it with the smaller pot. I think smaller pot can be a USEFUL tool. 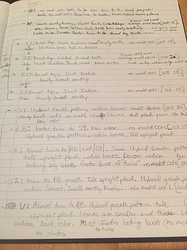 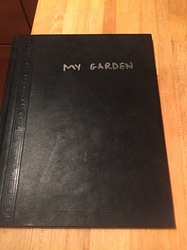