I had problems with drying and curing first two grows I’m thinking of drying in my 2x2x5 tent. I have an infinity t6 exhaust fan, two small circulating fans in tent. My question is will the t6 on low speed pull too much air through the tent for proper drying or should I just run the oscillating fan against the wall of the tent for circulation.

@Bud1 I harvested today as well and drying in my tent…4x4 tent. 4in Infinity fan set on power 4, a small fan and small heater. Temps are in 50’s and humidity is 55-60% range (need to monitor as I just took out everything moist). As long as humidity and temp stay around there, I’m not too concerned about the amount of air.

Freezing and snowing here today, can’t get my garage much warmer than it is!

Sounds like you got it under control happy growing

Thanks for your input. Happy growing

I dried in my 2x2x5 tent. I turned the filtered exhaust fan all the way down, (also tried using a timer on the fan, one hour on, one hour off), a small dehumidifier to pull moisture, and ducted my input air hose to cool spot. It worked fine but it’s time I can’t use the tent to start the next grow.

Current plans are either a dry box I can fold up and stow when not in use, or a sprout/seedling station which need not be very tall, and could use a simple fluorescent stick light for germ and a week or so seedlings. That way hang time for dry doesn’t slow turnover.

Thanks for your info. I built a small drying box of pvc pipe and reflectex(sp) and first grow I couldn’t maintain proper rh and temp. Buds dried too fast. I made modifications to accommodate a 4 in exhaust fan and a small computer fan for intake. I think using either tent or box for drying it will still be a challenge to get the temp down to 60f in the grow room even though I have a pioneer split unit for a/c-heat. I think I can achieve 60 rh. I have a dehumidifer that does a good job controlling the rh in grow room since I was told to regulate the grow room and not the tent. I have a small cool mist humidifier that I place in the tent however I’m not sure it is big enough to make much difference in grow room rh. I’m wondering if it stays in tent would the mist from the humidifier keep the buds too wet. Any input is welcomed as I hope not to have to buy a room size humidifier like I had to buy a room size de humidifier . If it works out I need a room size humidifier does anyone have one they recommend?

Adding moisture to a tent or dry box is easy. Literally anything from a pan of water to a wet cloth can donate water. It’s getting humidity down controllably that’s a pain. That’s where the big operators use electronics to control an array of fans and dehumidifiers and pricy hvac

Im in a second floor apartment in a tiny, 110 yr old house. Without central heat/air, I ducted part of the the output of a window AC to my tent in hot months, to combat temps in the tent. Adding cold air and pulling off hot air kept the RH from climbing horribly.

Now that it’s cold outside, I lost my AC as a cold air source, and keeping the tent warm enough to germ seeds was a challenge. So I’m “drying” house air by warming it as it passes through a 4” dryer duct hose draped along the side of a 110v oil radiator that acts as a handy source of heated (therefore dried) air to pull through the warmed duct, into the tent. I was able to raise temps in the tent 5-7 degrees, and reduce RH at will by timing watering plants. Translate all that to using either a tent or wardrobe box to dry, and I’d use the oil radiator at some distance from the box as heat exchanger to dry the input air without drying the entire house. Warmed air passing over an oil radiator, then sucked into the long duct that lets the hot, dry air cool into cooler dry air is dry box heaven on the cheap. The oil radiator is key. It’s clean, relatively safe, dry air you pull off around it.

Thanks for the help. Sounds pretty ingenious, necessity is the mother of invention

@Northcountryguy way to make the most of what you have

Thanks for the accolades.
I really think controlling temp and humidity is one of the big keys to success with flowers. Sure, weed grows in climates as varied as the Russian steppes to the jungles of Central America. But let’s face it, what Mother Nature can scrape together given billions of tries isn’t a fair comparison to what we do.

Y’all stoners who had science after lunch, listen up.

Get a relative humidity and wet bulb chart. Understand this. The term relative humidity is relative to however much moisture would saturate the air at a given temperature. Temperature matters because as air warms it expands and literally makes more capacity to hold moisture. The warmer the air, the more water it takes to be moist. The colder the air, the lower the capacity to hold water.

So if you have a typically drafty, unevenly heated old house, and your tent is in a spot against an outside wall, struggling to hold 65 degrees with lights on, you’re in deep Doo doo trying to germ seeds, for example. I needed heat without placing a heater in the tent. The oil radiator was perfect. I could use it to preheat the air entering the tent, which gave me ample hot, dry air, modulated by the speed control on the exhaust side pulling filtered air out (and scrubbing odors).

Sorry pics got out of order. The last shows the duct coiled and placed to act as heat exchanger. To use as dryer, I’d move heat away from tent so the air would cool in the duct and go into the tent relatively dry.

To use this set up to dry flower, I’d simply move the radiator away from the tent a distance, draw warm air from around it as I am, but let the air travel through a length of duct on the cold floor, against the outside wall. At that point I’ve created a dehumidifier, and could control temp and the with the exhaust fan speed control and inlet duct and routing. 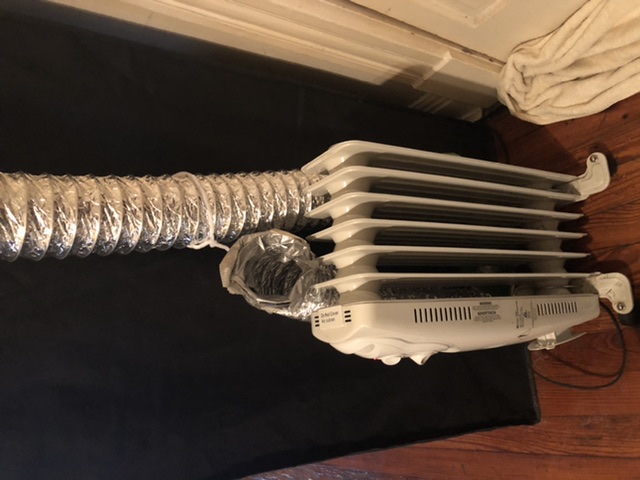 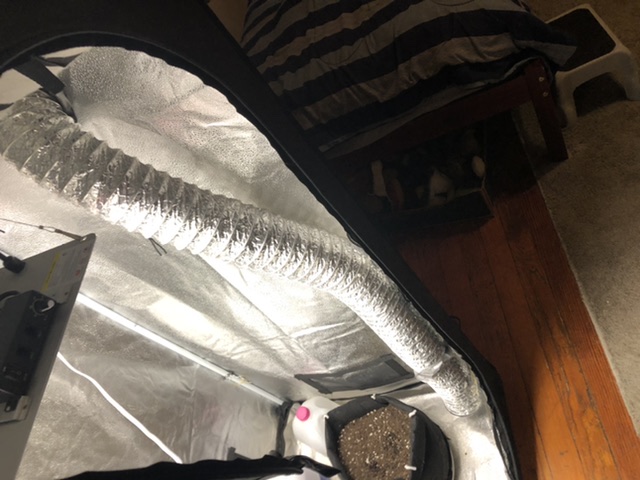 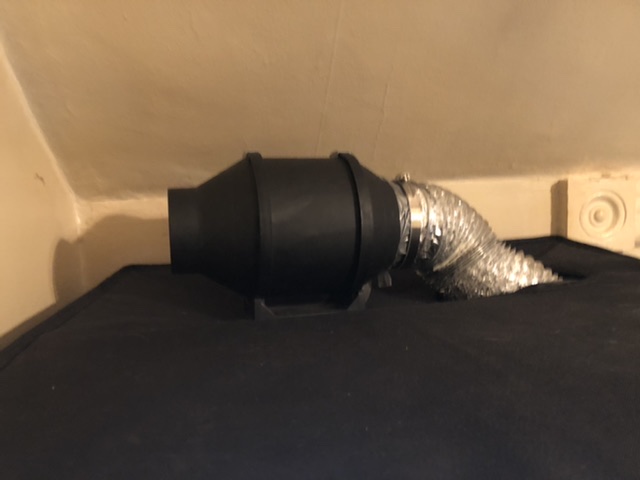 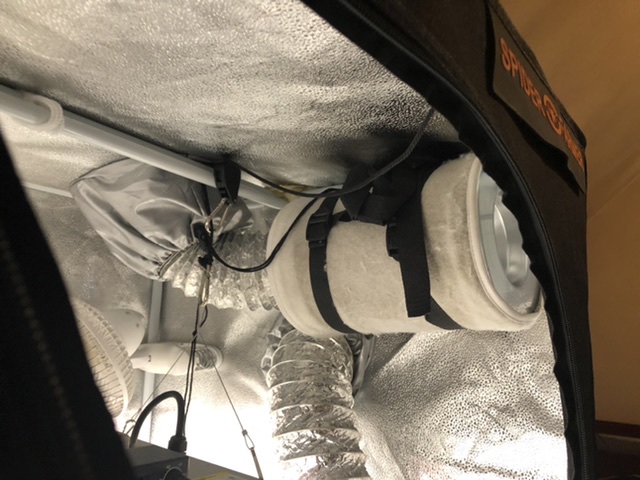 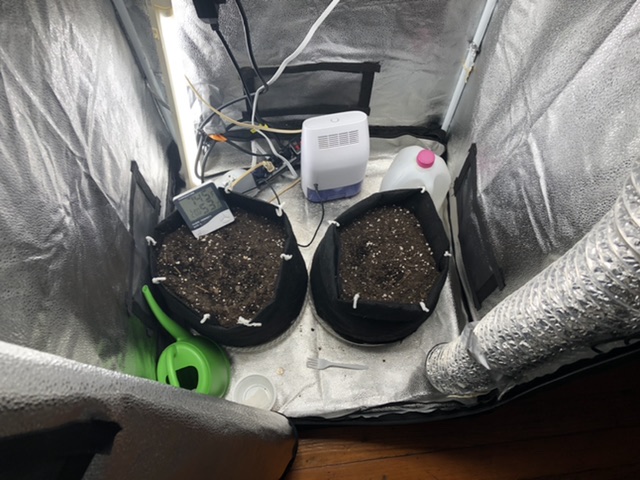 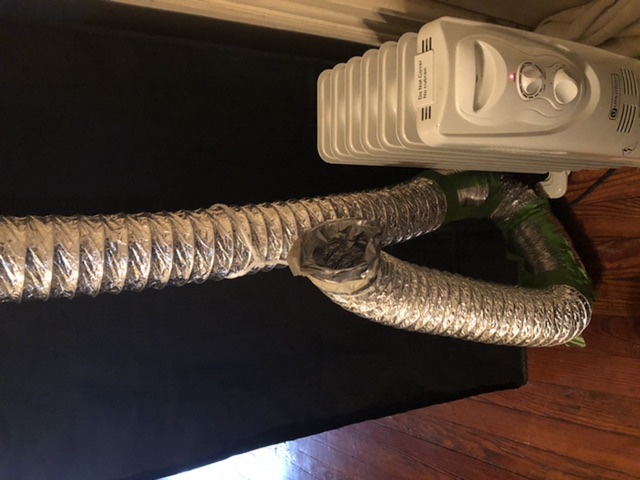 Thanks for the confirmation

Sounds good thanks for the info

Im using mine for hanging… Perfect conditions for drying Bruce Almighty. Got the Harleys in “the box” drying. Day 9 still no snap… 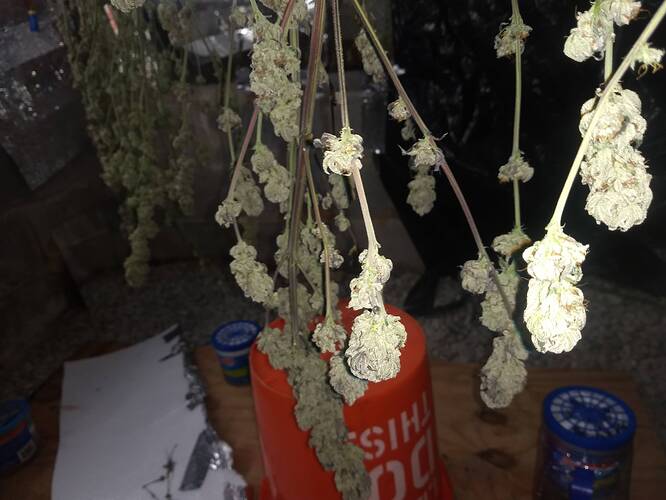