Been watching You tube on grows. The push really seems to be for massive yields.

Out experience in our vegetable garden is that large yields in the crops often results in lower taste quality. Try a piece of a 200 lb pumpkin. No flavor. We found the same with tomatoes and carrots.

Has anyone noticed same with weed?
Since I am growing strictly for personal consumption, I don’t need high yields. Maybe good for bragging rights but I am after high THC content and excellent taste.

That’s a interesting take on it. I would surmise that quality should be the same for big buds. I mean in the end whats the point of spending all that time and money for poor quality product. Haven’t those monsterous plants been selectively cultivated to do just that; be huge and nothing else. Cannabis isn’t that at all. It’s been cultivated to do whatever the breeder intended. Give it all the nutrients it can take organically or not and it’s gonna react to you inputs. Genetics play a huge role, you can’t turn a heirloom tomato into a beefsteak…well technically that is.

Your probably right.
But sometimes to be the meanest kid on the block, you push beyond the limit. I.e. steroids

But I just a guy with too much time to ponder.

@SlingShot I understand completely. I’m also the guy with too much time to ponder. I could even be down the block with a mean grin but no steroids

all natural. I’m interested in the grower who is making these football nugs too, do they taste like footballs?
I’ve only managed to get product from 2 grows. First one was delicious and molded quickly. Second one is currently being attacked by caterpillars and in emergency dry mode. I’m happy to just get a taste at this point.

In my previous grow I had a lemon kush “runt” - half the height of her sisters. She turned out the sweetest buds of of all of them. She was no slouch in the yield department either though- she beat out 2 of her sisters.

I’m growing 100% natural: no bottled nutes or molasses unless they fell from the sky. If I sacrificed some yield, oh well. The quality I ended up with was top notch.

I think it’s the ways its grown no matter size

Probably so.
The other night on YouTube I saw Dr. Auto being interviewed. He has a reputation for very high yield plants. He does it indoors.
But he said he is stopped the big trees and is moving towards fast grows.
He mentioned having had pine cone size buds but could not really cure then properly. And he felt the large buds were not as potent. Isn’t that what Autos are all about?

That’s funny my autos all the same seed and three very different outcomes…I experimented and tried soil for one of them. Turns out it took a week longer but good buds…one of the three was complete larf and the third I got a 3oz of flower but not fat flower like the photo period plants…next grow I will have less plants and easier to care for and maximize the plant as best I can not really thinking of yield as much as quality.

So, in my view it’s still early in the process of domesticating cannabis, compared to say, tomatoes and peppers.

Ruderalis I think is interesting genetically in the long run because it’s like the difference between determinate and indeterminate varieties. You could leverage that to get 2 harvests per season outdoors - assuming you have a nice indoor garden to get things started. Your autos could flower in the spring while the days are getting longer, and then put your photos out a bit later at midsummer.

Genetically though - a “Bruce Banner auto” will always be a cross between the original and some other plant that expressed ruderalis. And since it’s a recessive trait, generally it will need to be back crossed to the auto parent, not the original, in order to select for it and guarantee the seeds are autoflower. You might find a gem but most likely you are getting a diluted version of the real thing. In my view. But the 2 harvests part far outweighs the drawbacks.

@SlingShot you can get high quality and high yields with cannabis as long as you can increase the resin production to compensate for the increase in yield.

As far as outdoor in the veggie garden though quality usually suffers for larger plants whether it be cannabis or veggies because they aren’t getting the right nutrients to produce the flavenoids and terpenes. The larger the plant the more micros and carbohydrates you need for the terpenes and flavenoids to be produced in the carbon bonding cycle. So as long as you aren’t seeing any macro deficiencies I’d suggest going ham with cal-mag, iron, etc… and increasing the carbohydrate feed (such as using molasses) so that you can get those soil microbes working overtime to break down the extra micros the large plants needs for proper respiration to increase the efficiency of the carbon bonding process in which terpenes and flavenoids are produced along with carbohydrates in the plant.

I am a 50 + years grower and have reverted to 1 gal containers. I will grow about 30-40 at a clip in a 32sq ft tent…4 lights, 6502 3289 lights, a viperspectra xs1500, spider fs1000 and a BELUX 1000 (veg/bloom) for seedlings along with an aeropod for seedlings
I avg yield 1-3 oz per plant. I add a UVB/IR last 3 weeks for 2 hrs a day
no more 5, 7, 10 gal. I have outdoor 50L containers but summer (living in Vegas) has just been too hard and a/c is too expensive for indoor grows so no june/jly/aug/most of sep…we are still in 110 plus at these times of year. I am still at 85°F during the day and my southern yad is still hitting th 90’s…
My tent plants far outperform (potency, taste) my outdoor
MDBuds - I crossed your gold leaf auto with Acapulco Gold and it is seeding. I ALSO CROSSED IT WITH Durban AND IT HAS JUST ABOUT FINISHED SEEDING. i CANNOT WAIT TO PROPAGATE AT MY NEW HOUSE

I been a gardener longer than anybody here.Yea, I’m that old.I have never seen any research on yield and taste of fruits or vegetables.Maybe it is out there. Yield is the name of the game with pot growers. The small time commercial grower(1000 plants) always says that their weed is better than a 10000 plant grow. To stay in business size of scale matters. Organic growers say their weed is better than you inorganic pump in the ferts growerers. Maybe.

potency is found in the genetics. You can’t get a THC content to rise significantly no matter what you do. No amount of ferts or cal mag or CO2 increases potency. In all due respect. The marijuana business is so full of semi scientific…information it is laughable. Americans particularly are full of the modern ag business way of doing business. Growers (Not bashing you) are lost in the process.

Very intriguing perspectives. I agree with everyone here. Truth in all of it I believe. The problem is big ag lies. People lie and TRUE science is testable. Proof. Who really has the money to invest in the science? Only BIG business and universities funded by them. Everyone thinks they have a handle on it when actually no one has all the pieces together. Simply because we cannot explain all the natural processes in which any or all plants function relative to their environment. Yeah we know this and that but chemistry, biochemistry, hormone function, and microbiology, etc aren’t the ones who can speak the complete truth. I just want to hear it all and sift out what I know to be true through my results. Growing is fun

I would imagine as this becomes more legal and therefore bigger markets, there will be a lot of competition and with that, more research and science. Of course, commercial grower are going to play their cards pretty close to their chests. I’ve already seen that on You Tube interview with a commercial indoor grower where he was pretty vague about technique and formulas. There were rooms where the cameraman was not allowed.
I guess it’s like the Coke formula. LOL
Anyway, it sure makes for an interesting discussion.

@mightytoke these methods are scientifically proven to increase resin production and yield. Study after study has been done on Co2 and UVB light.

It has also been proven that micros are necessary for proper respiration and carbon bonding and larger plants will obviously need more.

Genetics do set the chemotype, but there are methods like I stated that allow you to achieve the maximum potential from your plant.

@Mrb53004 hell yeah man. Those sound like they’d be some insane crosses. I can just imagine the uplift if that gold leaf took on some of the thcv from the Durban and that Acapulco cross sounds like it would make a heavy yielder.

That said, most of our homegrown community is about performance first, yield second. We aren’t the corporate nasty mids.

A small indica plant will often be much stronger than a huge tree, this smallish plant is Ripley x Triangle kush x strawberry nuggets, I may get a bit under an Oz but what I do get will be fire, large high yield plants are good to make money but who wants to smoke the same weed month after month? Not me! 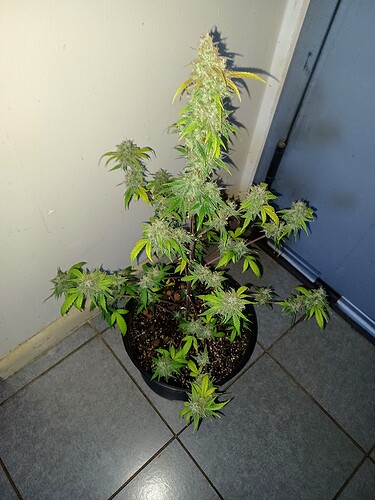