Autos Outdoor Greenhouse Grow...To Fim or not to Fim

It is a matter of opinion. Personally, my feeling is that auto has a very small window to produce. Indoors or out, I only TRAIN (fim, top, lst) during early development. After we begin seeing flowers, I only defoliate. There is not much recovery time available for the plant to heal when it only has 8-10 weeks of life.

@Mrb53004 Thanks for the reply. I notice at about week four, these ladies start to flower. After which set of leaves do you generally fim them? On my photos I usually wait until the 5th or 6th set and then continue to make a bushy plant. If I’m not mistaken by week four there may be only 3 or 4 sets of leaves.
What are you thoughts?

I base it on the plant. Like people,each one is different. You begin to know your plants, like friends and family. The more you are around them, the more you know them.
Here are some of my auto (GirlScoutCookie) I started training early on. 1 Fimmed, 1 topped. 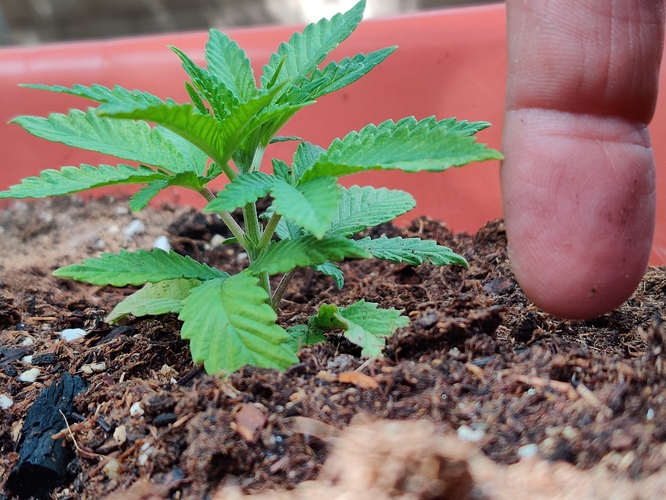 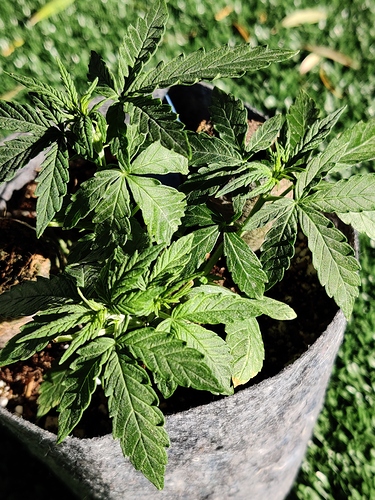 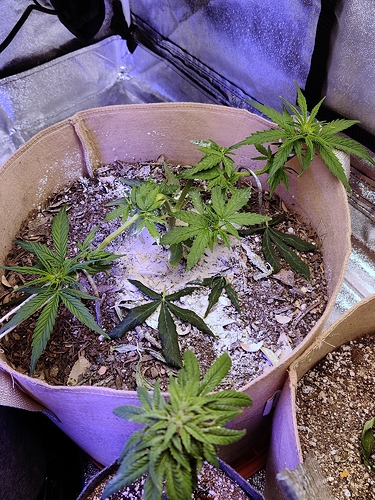 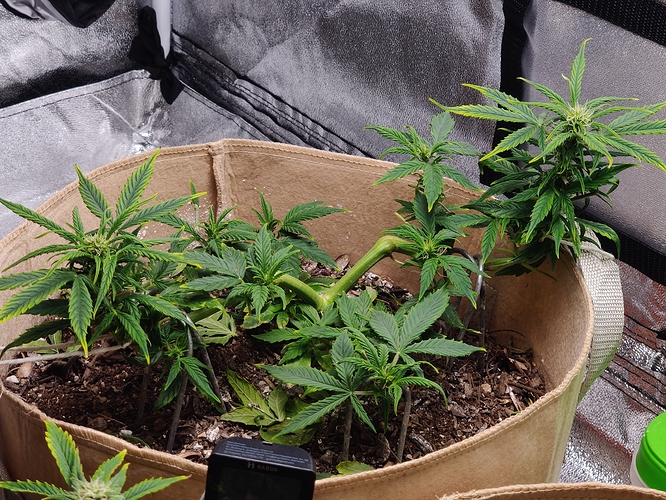 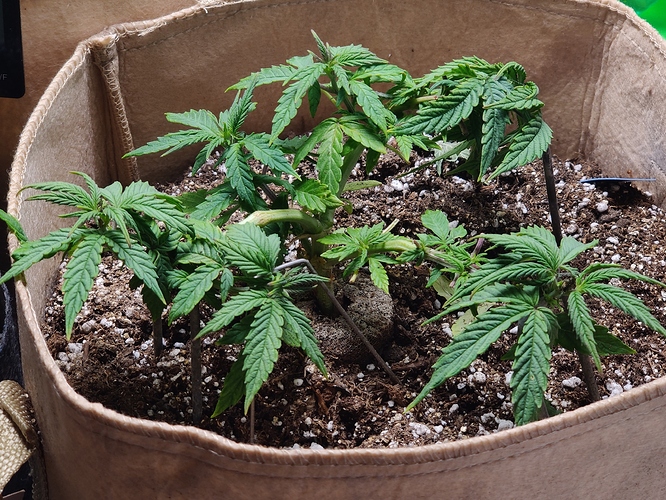 and some of my pheno buds - GDP, 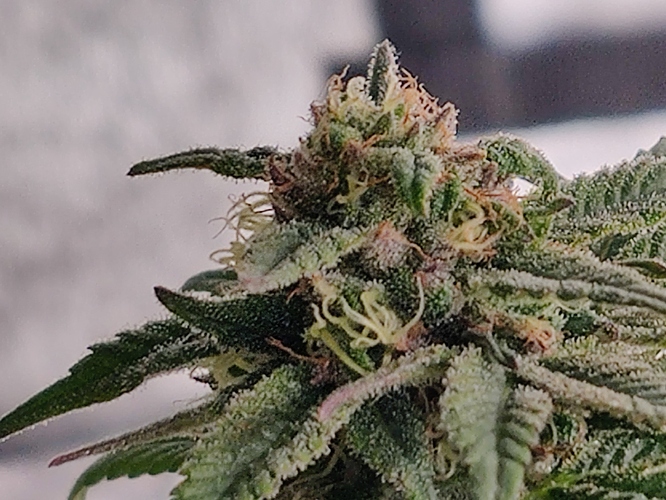 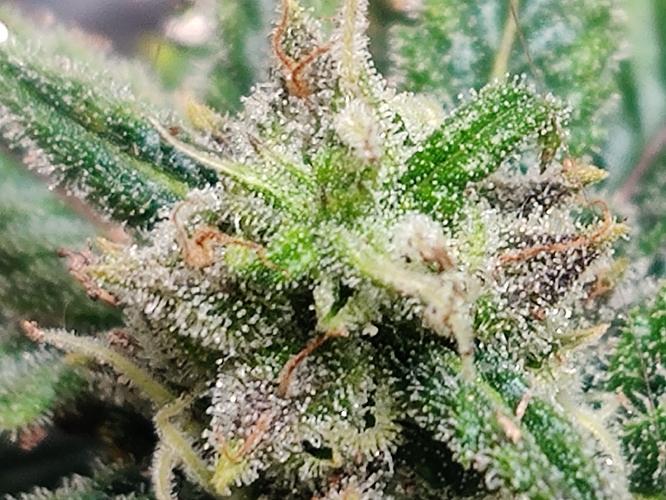 This was my first time growing outdoors and had a few seeds of Monster Cookies and one White Fire OG. 5 of the cookies gwrminated and the wifi og as well. Didn’t know if they were autos or not but I decided to Fim the Monster Cookies and left the WiFi OG without Fimming it. Results were awsome on cookies and wifi as well but got more out of fimming the cookies. Fim is best no matter if it’s auto or not.

Thank you all for your input. Gonna start a few more this weekend and play with them a bit to see what works for me.

Is my girl still in Veg? Autoflower Suport

OK, quick question on Auto’s… I have the other problem, I planted: 3 critical purps, 3 Northern lights and 3 GoldLeaf, all auto’s. (they are NOT HCC seeds - a different Co.) So what happened was that 1 GoldLeaf and 2 Critical Purps are just STUCK in veg and everything else has been flowering for about 2-3 weeks (in fact I am harvesting them this weekend) these were ALL autoflowers (advertised as autos and all came in the same tube)… They are all in the same grow box, same lighting etc. In fact…

You didn’t say how long they have been growing. Auto’s can flower as late as 5-6th week and be finished by 10/11. Sometimes we think we have auto and they are pheno’s. So we start the process of elimination:
When did you seed them, what is the light schedule. We won’t bother with feeding because we will assume your nutrient solution is across the board for all your girls. Environmental: Are the grow areas different. different lights, different locations under the lights (I rotate mine in the grid so PAR is average for all). Humidity, ph, anything else that distinguished them from the ones that are flowering (besides strain and are all the same strain having the same issue)?
You are cropping this weekend - so I assume they have been growing a minimum of 7-8 weeks. Only a pheno would be in veg at that stage unless you happen to get 3 mutations at one time (kinda impossible).

Is my girl still in Veg? Autoflower Suport

@kanashiihawk yes it is possible that they didn’t stabilize the auto genes and you ended up with a few “fast version” seeds. It’s a common pheno variance in unstable autoflower genetics. F1 50/50 fast/auto f2 25/75 fast/auto F3 and beyond are much more stable and much less likely to have a photo pheno variance.

@MDBuds and @Mrb53004 ;
Hey guys. I planted all the autos at the same time (Was like 85 days ago). All seeds came from the same “packets” marked Auto-flower Gold Leaf, Autoflower Critical Purple and Autoflower Northern Lights. All popped and grew except for 2 auto critical purps and 1 auto Goldleaf. I am leaning towards MDBuds’ answer that maybe, a weird Phenos or a “Fast Growing” that was accidentally put in with Autos? (I have nothing negative to say about this other company but it was ILGM Growers Choice Seeds)…

As a wicked experiment I have been Topping and FiMMing these perpetually vegetating “autos” and they are behaving exactly like photo-period plants, growing awesome multi-cola sites (but still as of 11/21) NO flowering or sex organs of any kind!

As a side, ALL the other autos were fully flowered and perfect trichomed and were cut yesterday to begin their 14 day drying/curing/

I have had some bad / carelessly handled seeds from ILGM. Twice. I give them a pass because they have a 100% germination guarantee and have been good about sending me different strains as replacements. So I have next season’s seeds. No more autoflower for me, they always turn out runty. Many coarse leaves with only 3 fingers, I think I have a pretty good idea of what ruderalis looks like…

I think seed packs sometimes get mixed. Breeder mistakes I mean, not the banks. I ordered a pack of KC Brains kc-45 autos on sale a few years ago from attitude. It was a 20 or 18 pack and not 1 auto. It grew like an old school haze and was not done until thanksgiving. The seeds were popped on jan1st. Indoor 430 watt MH (old sun Agro set up). These were the first autos I tried. Anyway, I had to move them outside because they stretched like crazy and would not autoflower. I even Dropped them to 8 hours light for several weeks at 3ft tall. It was before I moved them outside. No flowers WTF…? I hacked them all year to my knees. Like every time I mowed my lawn. I shit you not I used my weed whacker and hacked away because I was over it. Damn auto flowers. and they still pushed 8-9 feet. I bet they would have broke 12-13 ft if I let them go. Way too tall to be discreet. They finally flowered that fall. They all turned into really nice looking purps. Sweet pineapple smell. But weak high.

It cloned really easy too ( auto trait right?). Specifically the weed whacker hack outs would root where they lay lying on the ground where they were flung. In both my grass and raised bed. They would just stand up like zombies after wilting in the full sun for a few days. No love. No water. WTF.

I only ran it a couple years because the yield was low despite being massive. Also, the buds were not too potent. Makes me wonder if they had some CBD too because I would always feel good. Just not high. I tamed the zombie growth the next year by root binding them in 1/3 gallon pots (so tiny). They still were the biggest ladies. They looked comical being so big in such tiny pots. I Had to stake thru the pot bottoms or they would fall over too top heavy. I ended up seeding her with a runty (dwarf so tiny) bubba kush I had. To simultaneously tame it down (KC-45)and beef it up (bubba runt). It was a failed branch of the cannabis family tree and never was great. So I let it go.

The point of this long winded story is sometimes the autos don’t auto. Whatever the reason.

I did some dj short lowryder next and they performed great. As in they auto flowered. The only other autos I did outdoor were called auto blueberry crumble; by blimblim seeds I believe I got from Herbies. It Auto flowered properly as well.

Sorry so long winded, I got high
Noddykitty