Am I just adding extra cost and heat?

yes…exactly what I did. Used hot glue to secure to the pvc pipes, one on each pipe…can relocate them as horizontals, verticals…whatever…and turn to change direction from positive to negative…360°
I also bought the connectors on Amazon to tie right in so no wire cutting / taping…they were cheap. Got 12’ leads and 3’ leads so I had room to play with. Then USB canbe to the phone charger

I had a similar dilemma with my previous grow. I had an extra light because I upgraded the light in my “flowering” tent. But then I started to get light envy in my other tent, because I was flowering that one too. (I overdo things sometimes)

I had trouble keeping the entire room under 85 during lights on after I added the extra light. I had to add an AC to keep it in check and run with the doors open.

Like you I also have intake fans in both tents, and I think the air exchange helps to keep the CO2 up. I never took any measurements to know where I was at though.

I pushed the plants really hard with the light and they took it - I was waiting for them to cry uncle but they never did. I ended up with great results in that run. The buds are dense enough to break a window and my yield looks like it’s going to end up at 1g/watt.

So all of that is to say, I think under the right conditions with the right cultivar, it will pay off in yield, but you’ll see it on your electric bill. I got great results, but I wouldn’t do it that way again, not during the summer anyway.

Summer electric costs was enough for me to shut down operations when I was growing 3k plus sq ft…Now that I am a simple homegrower, struggling with summer is still biting me in the butt. It is TOO expensive to a/c the tent (my home bill already tops $400.00 without the tent). I took it outdoors and the heat here in CREMATORIA burns up more then 50% of my crop…I think I will just forgo July and August or maybe just do indoor low voltage seedlings. It winds up being cheaper at the dispensaries when the sales are on…can pick up half an oz for 60.00-70.00 on decent stuff, 90-110 for top shelf. I tell the wife to MIX some of the cheaper as an extender. She is a good bud tender. If she tended chickens, she would be a chicken tender

How do you add 2 1/2 inches of soil to the bottom of your pots that you just didn’t have the money to add when you planted them?? Very f ing carefully!! Lol most scared plant daddy moment of my life! See how they look in the morning… 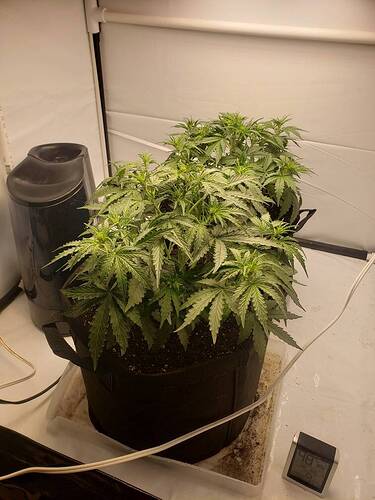 to start with, go to cloth containers. Sometimes I move my containers into larger containers if I have a winner…I cut the bottom out and slip it in a larger pot.
Otherwise,as you said…VFCarefully
I bought 1 gal cloths, slit the seam open, split the bottom seam about 35% and use Velcro tape to hold them together. Then to transplant, I peel the tape and remove in entirety the plant…transplant into a larger pot and have reduced transplant shock / stress greatly. The key is that the soil must be similar in density for the water flow to not be affected. I do usually, but not always, remove about an inch from sides and bottom but with Auto,I do not like the added stress

They are gtg. No signs of trauma!! I love fabric pots!! Never had a problem up sizing… But was nervous just adding soil to the bottom. They are strong and about ready for the scrog!! So happy. Great idea btw. Velcro tape. I know some pots come like that. But never thought of adding it myself… I just sacrifice the previous pot

Sorry to bother but I’ve been looking for gmo beans forever can you tell me where you got them…?

28 days in. Starting to flower and dropped the scrog on 'em 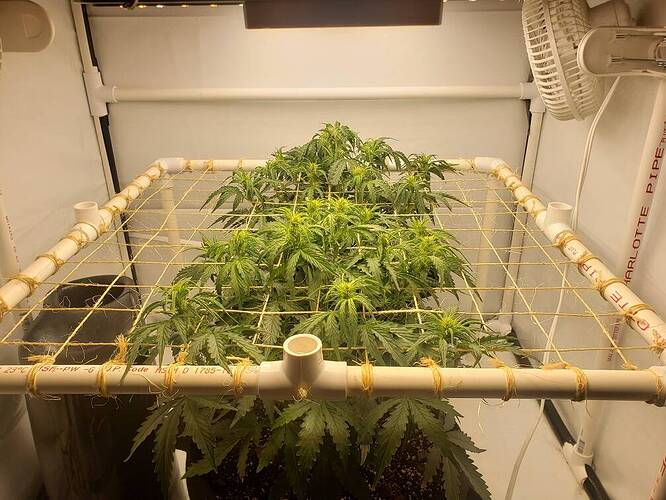 35 days and out of the scrog. Starting to get excited!! They smell o so good 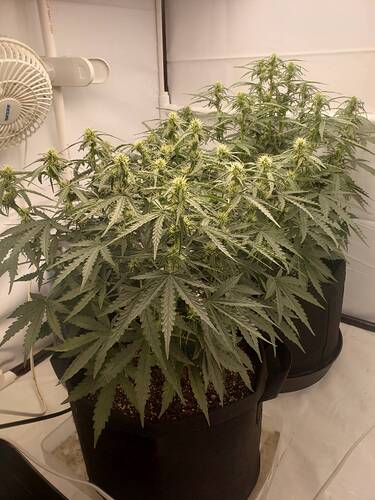 How this Beauty doing? 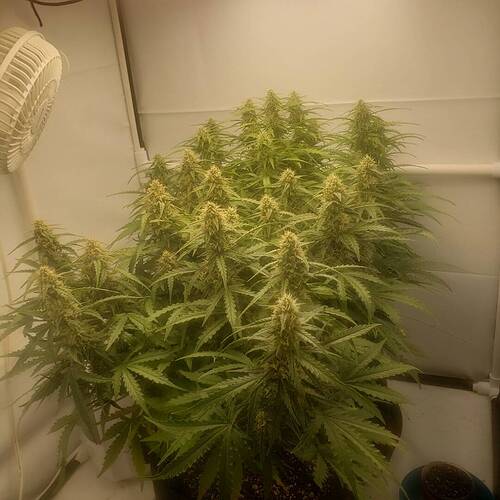 BEAUTIFUL! I’m hoping to get there one day…

My gurls got 3 more weeks till Im flipping them.

I look fwd to being able to put up a green house… and try some photo’s. And salsa garden always wanted a salsa garden.