Where am I at in this process? 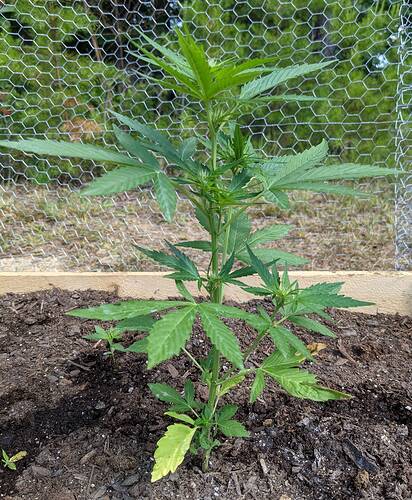 PXL_20210805_150053900 (2)2735×3315 1.48 MB
I will start by saying I have not followed many rules and have been winging it. I’ve screwed up at many levels, starting from germination. Much has to do with my owning a business and recently moving. I haven’t had the time to do this right. No diary. A few notes but for the most part, I am just letting them grow.
I am going a mixture of Blueberry Big Bud Auto and Kush. My star plants are the Blueberries since I have grown them longer.
I am fortunate in that I have 18 acres on the top of a hill. Zero public access. This is not yet legal in my state though it is coming soon. But I don’t have to worry about nosey neighbors, smells, etc. I own the entire hill.
I live in the wettest county east of the Cascades but I still get plenty of sunlight. In truth, I think I live in an ideal location for this endeavor.
I think I started about the end of June, first days of July.
I had one crop a total fail except for one plant (out of 8 seeds). After that, I got a little more serious and educated. 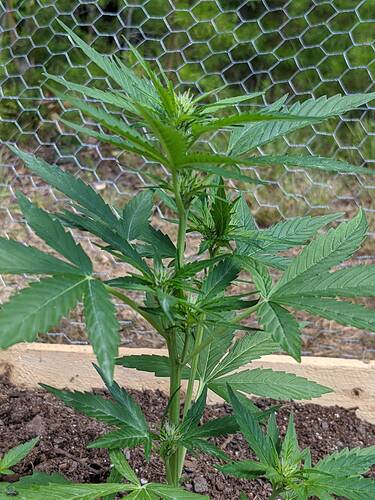 I started under a grow light (el cheapo) and moved into various pots. I finally decided to go au natural since I I have the land. I made a raised bed mostly of coir, peat, vermiculite. I’ve used the nutrients I’ve ordered from here. I think I have the medium right.

I saw some bugs and sprinkled a little Sevin 5 but that problem went away when I transplanted to a cedar raised bed. The bed in only 7 inches deep so I tilled the real soil underneath and treat with black kow. I had sampled it and it came up as “depleted” in all basic categories. I water every other and keep the garden under a plastic tent at night or when it rains heavily. They are getting about 15 hours of sunlight. In early July, I was shading them because the sun was so intense I feared they would burn up. I fenced it in since I have a lot of deer and the black bear that like to poke around and eat my real blueberries.

Some of the lower leaves turned yellow. It happened shortly after transplanting so I wrote it off a “handling damage”. To be on the safe side, I added a little Magnesium Sulfate (Epsom Salts) and I think that did the trick. The yellowing is going away.

My wife put in the Marigolds as a natural pesticide as she hates Sevin 5.

I have several plants at different stages and different seed strains. Did I mention I was not very discipline? LOL

I am trying to just let nature take its course and simply correct it when it goes off the rails. I’m somewhat lazy.

This morning, while watering, something I do every other day when it’s hot or every 3rd when it’s not I realized, I have no idea where I am at in the growing cycle. I see these little fuzzy puff balls forming but am not sure what that means. So, in my long-winded scree, that is my question. Where is my plant at?
TIA

I’d estimate around 2 weeks into flower. Congratulations! She looks nice and healthy.

Thanks. I truly needed to hear that. Guess I am doing something right. 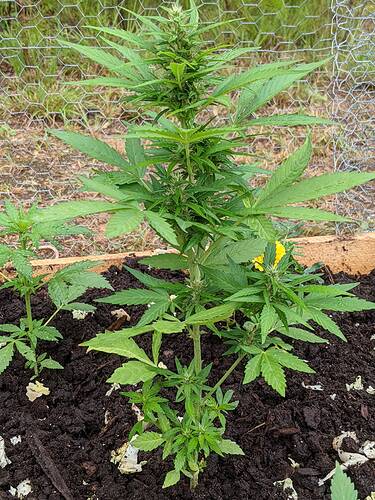 I guess this should start turning purple.
Do I need to support the branches?
What is my next major step?

I doubt you’d end up needing the support. But it’s always better to have a plan and then not need it.

I’d say your next step is watching for ripeness. The majority of your pistil hairs will turn orange and the trichome crystals will go from clear, to cloudy (peak ripeness), to amber (overripe). You’ll need a jewelers loupe or something to get a good look at the trikes.

okay, thanks for that.
question: Let’s say I go out and see some trichome crystals that are cloudy. What is my next step? I have seen various methods for harvesting but could you give me the “happy path” since this will be my first, ever?

Since these are Blueberry Auto, shouldn’t I see something “blue” soon?

How much color you can pull out of them has to do a bit with environment. Some colder overnight temps as the plant matures should get that to happen. If it’s not getting very cold overnight you could try watering with some ice cubes.

Harvesting is the easy part - just chop the plant down. Drying and curing make all the difference in the quality of your smoke - if you do it wrong you can really degrade the quality (ever had smoke that smelled like hay?)

For drying, you want to create an environment that stays around 69-70F and 60%RH. If it dries out too fast or gets too warm you’ll degrade the quality. I’ve got a small bedroom with an AC and a dehumidifier. It also needs to be dark.

You hang it until it’s dry to where the stems snap clean. When you pull a bud off, it shouldn’t pull a fiber along with it.

When it’s that dry, it’s time to trim and jar up the nuggets. The less excess air that’s in the jar, the better. For about a week or so, you want to open the jar daily and give it a smell. It should smell like weed. If it smells like ammonia, the buds are too damp and need to dry a little longer.

Thanks so very much. You are a life-saver. I will try not to pester you too much but there is so much to learn here.

Just becasue it is BLUEBERRY does not mean they will change color. UV and IR help in that process as does temperature. We can trick our plants into thinking it is winter by feeding with icecubes at night. Place ice cubes around the perimeter of the plant…they slow melt and lower the soil temps. Plants think winter is coming and start developing their terpene production (different than trikes). Terpenes give you color, flavor, medical and physical / psychological properties. You are at a good point of BUD development…let them GROW!. The pistils will begin to turn color and that is when you start watching the trikes for clear to cloudy to amber…It is the first sign. If you keep getting new white pistils, she is still flowering. Plant looks stupendous! Do not start lowering temps yet…that gets done about 3 weeks before harvest.
Harvest…blueberry is an Indica dominant strain…tht means relaxing / sleepy / night time strain usually. If you let it go amber (trikes), it becomes MORE COUCH LOCK…so it is now down to preferences…My choice is milky…no amber…still some clear trikes…Better for pain / anxiety relief so I can feel it instead of just passing out.
On average, when the trikes are ready, you yank her…Looks like you are growing organic so no need for flush. If you are using synthetic nutrients, then 2 weeks of PLAIN WATER FEEDING…a good time to use the ice cubes. Then let it dry (around 4 days) cover (anything…a bag, a box (I use cardboard boxes to cover my plants…I can mimic shorter light periods to fool the plant into thinking winter is on its way and reduce light to 8-10 hrs…)…mostly for photo…auto’s kinda just do this no matter how much light…they grow with a min 5hrs light…Remove form soil, root and all…begin the dry process, then cure…Blueberry is a sturdy plant that doesn’t usually require supporting the branches and is pretty mold resistant…AN ALL TIME FAVORITE
I easily see minimum 4-6 more weeks of flowering…they are starting to STACK UP RIGHT NOW

I have read about various techniques to advance the process. Pruning, topping, training, tying branches, etc. I did pluck a few leaves off my prize tree but than my little mental voice said, “stop, you don’t really know what you are doing! Just let nature take its course.” 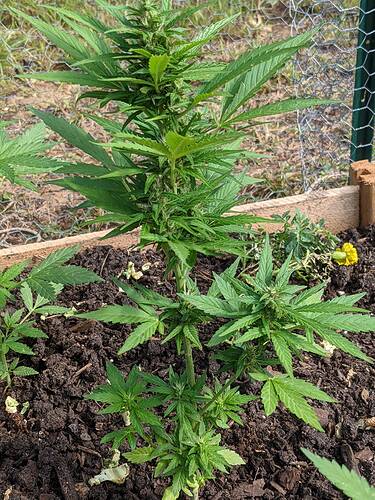 I’d hate to destroy my first tree! I do have several others in the box and they have surpassed this one on size, maybe because I knew a bit more when I put them through the early stages. They are about 3 weeks younger but are really spouting up!!! They are Kush’s and not Blueberry but I have lost track of what some are. I was pretty overwhelmed, early on and the terms “auto”, Feminized", “Indica” meant nothing to me. (I do understand that now.)

I think several are getting ready to flower about now. 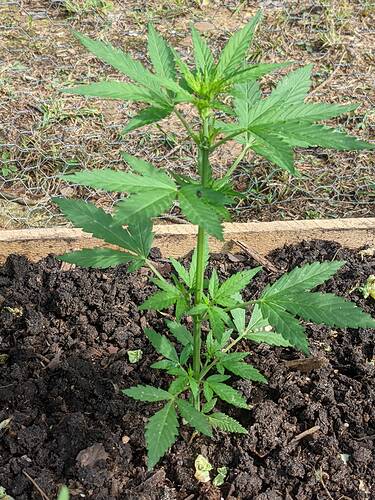 I understand that this is a learning process. I know through my business to expect failures on the way to success but like raising kids, you really don’t want to lose any! Okay, I’m babbling. I’ll hit reply and go on my way.

looks like your doing just fine, nothing wrong with letting nature take its coarse, especially outdoors, my outdoor plants that i left alone are thriving better than the plants i topped,trimmed & trained…

You guys need to teach patients.

My garden is about 100 yards from my house yet I must go out 5 times a day, just to check on my garden!!

Guess I need a hobby. Maybe I’ll take up axe throwing. Getting pretty popular in these parts.

Since midget tossing is frowned upon, axe throwing it is
My garden is right out the door…crap, I am out there a dozen times a day like if looking will make them grow faster / better
Seems the next day they look like they grew that night. I am going to have to sit out there with a green flashlight to catch that magical time…

well said. I’m sure we all feel the same, at least in the beginning.