What is this on my clay pebbles

Is this a mold or fungus on my clay pebbles? Is there something i can treat it with? Or should i leave it alone? Could it be nutrient?? Thanks for any help. 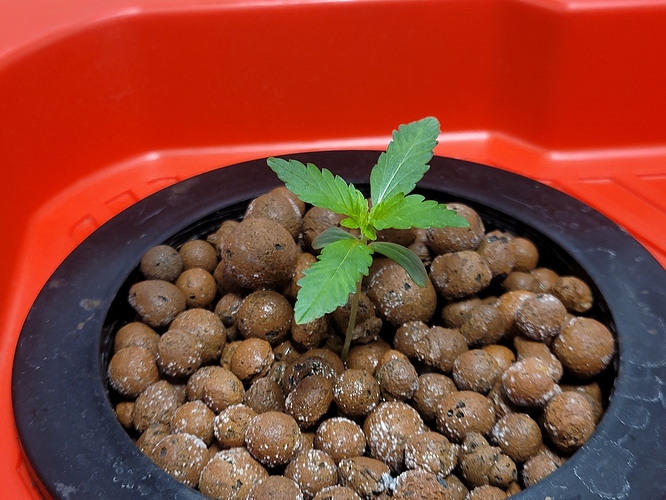 Looks like mold to me but a possibility it is dried calcium. Have you given any calcium / cal/mag / lime nutrients or Mg (to strong - it is a salt)?
If mold, you gotta clean you clay. Are you straight clay medium or a mixture under there?
Hows - air flow, humidity, ph, tds/ex levels and what are you feeding and how often. What is your temps in there

Must be mold. Humidity is 33% temps range from 72 to 75. Ph is 6.5 and I am using all clay pebbles except for the rockwool seed starters in the middle. I dont think i have calcium because i am using distilled water and a very low nutrient level. I guess i will be cleaning some clay. Any suggestions how to do that?

33% humidity is really not a number that I would suspect mold growth. Are these a recently purchase, a reuse from a previous grow, from someone else…Mold is something that takes your plants OUT, not down, OUT. NO MOLD unless you want sickness.
I used to recycle them like this: H202 (3% peroxide bath), bleach bath (tblspn per gal water). Apple Cider vinegar was (Standing water and or constantly wet hydroton can support mold growth but most molds don’t like alkaline ph levels and flourish close to 7 ph) Then boil in clean water then bake at 500F.
Problem can be - mold is in the plant or room and fan is spreading it. Mold gets inside the clay and is very very difficult to get out as the passageways are microscopic. Consider NEW Hydroton pellets or a dry top layer. Yoy clay may just be wet too often and doesn’t dry

These are seedlings, you do not feed them any nutes until they start getting ti the 4/5th node.

Never planted in that medium before .
Whats the benefits to using clay pebbles over soil

They are used in Hydro type setups. You water couple / 3 times a day. Higher oxygenation, more nutrients right to the plant,bigger, faster, more potent (to a point) growth

Looks like salt build up or some nutrients stain

I agree it looks like mold. And less salt. I see hyphae and not crystals. Touch it. If it’s salt it should feel gritty and be pretty firm and dry to the touch. It would easily dissolve into a shot glass of warm water. Salt would flush away w warm water bath if you flooded them right up to the lip.

If it’s mold it will feel soft and probably moist. And not dissolve easily into warm water. Probably float. Mold may respond (die) to alternating hydrogen peroxide and ammonia drench. I would at least try this before I repotted and swapped the clay beads.

Ammonia I dilute grocery store standard cleaning ammonia until it’s 9 parts water 1 part ammonia. I can’t stress enough how helpful ammonia is. ESPECIALLY on powdery mildew and white molds. Just don’t use ammonia under full light. Leaves will burn. Dim lights for a half hour or so or spray at bed time.

Kill fans too. You don’t want either to evaporate fast. Let them sit on the clay beads for at least 30 min without fans.

If your useing tap water could be caIicum build up