Kris, the cool thing about LST is that you’re not only manipulating the plant in a way that allows light to penetrate down to those nodes but you are also basically deciding what you want the plant’s structure to be like. So the small space won’t be an issue. Worry more about up than out. As long as you aren’t too close to the light and you defoliate as needed so that there’s some airflow, you’ll be fine. You might want to lollipop them to get plenty of airflow underneath the canopy. Especially since you have a small grow area.

Don’t try to lollipop them now, just to be clear. I mean when they are bigger and you have a wider canopy.

Thank you…I had to look up “lollipop” , so thankful there is so much information these days

This is my first indoor grow so i definitely dont KNOW anything. I got to researching last night and found several different EXPERT opinions that were all over the place on the subject.

Here is my lollipoping of a purple Kush, 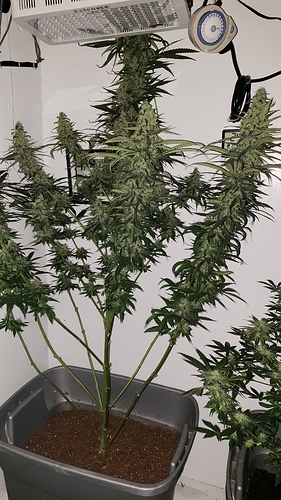 I started my seedlings under a mars hydro TSL 2000 with the dimmer turned down to 25% turning it up 10 to 15 % a day until i got to 100%. I was going to leave them dimmer longer but was getting leggy growth until the light was up to 100% then they settled down and grew out the way i thought they should.

OMG…those are amazing! Such huge buds