Should I be concerned about how small one of my plants are, it is an auto and the other 2 in the picture are not but I would think it should be about the same height as the other plants 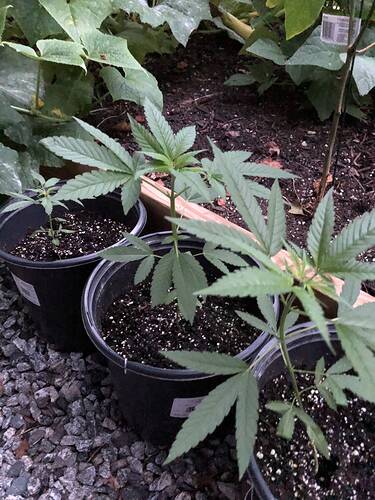 They’re gonna have some genetic variance. Some will just end up as the runt of the litter. Lots of people say you’ll get some of the best bud off those ones though.

It might be catching more shade from the cukes. I’d want it a little ways from those anyway as I always get powdery mildew on mine (the cukes). Looks like you might have a touch of it too.

I am going to move them into a tent soon. I started the seeds the first week of July and still have a few things to finish setting up for the grow tent. Every time I get to setting it up I get pulled away for other things, so at least the plants can still get plenty of natural sunlight until then. I have moved the plants a few times so they aren’t always next to the dukes but those plants do have the white stuff on the leaves. I germinated the seeds starting July 6, planted them on the 9th, so I’m sure they are in the vegetative stage now but not sure how long they will stay this way before needing to change the nutes, I may also need to upsize the container they are in.

Powdery mildew loves cucumbers and any other Cucurbits. I have found foliar spraying with dilute ammonia after the sun goes down is an EXCELLENT way to control powdery mildew. I learned this trick from one of my garden mentors and it kicks ass.

It’s always a tossup between my cucumbers pumpkins and zucchinis who gets the p.m. first. As soon as the relative humidity goes up towards the end of summer. It’s a battle every year. Somebody needs to breed cucurbits for p.m. resistance. Anyway, take a standard 1000 milliliter spray bottle and put about an ounce of over-the-counter ammonia in there. If you have a lot of plants get out the pump sprayer and put about an inch of ammonia in the bottom. Lemon scent ammonia is just fine too. It won’t hurt the plants at all. Often that’s all I find at the grocery stores around me.

Ammonia foliar feeds leaves nitrogen at the same time the high pH of the ammonia just destroys the cells of the powdery mildew. (That’s why milk and baking soda work for PM too; high PH) If you spray the powdery mildew when you see it on the first leaves, sometimes you can curb it for almost a month before it gets a foothold.

If the leaves start to curl from getting PM really bad just let them naturally curl. I found out the hard way if you cut those leaves off the big hollow straw of an open wound lets in the PM, or the bugs, or both into the whole cucurbit vine. They die pretty quickly after you start hacking off p.m. covered leaves. I would ust let the crusty old leaves ride. I have had vines double in size with all the old leaves curled up from PM. Meanwhile, the new growth is still taking off with more flowers and pumpkins.