I had one plant, growing by itself in a sun room, I noticed a little powdery mildew on a leaf and sprayed the plant with 60% water 40% milk. A week later I noticed another leaf or two with powdery mildew so I sprayed again. A few days later I sprayed with a friends mixture for mildew and other problems. A week later I chopped the plant and put in an open area with a small fan circulating the air. Now that my plant is dried, I’m noticing an odd ‘branching’ sort of growth on the buds. The buds are completely dry. Can this be saved? If it is still p.m. is there an issue with smoking it? 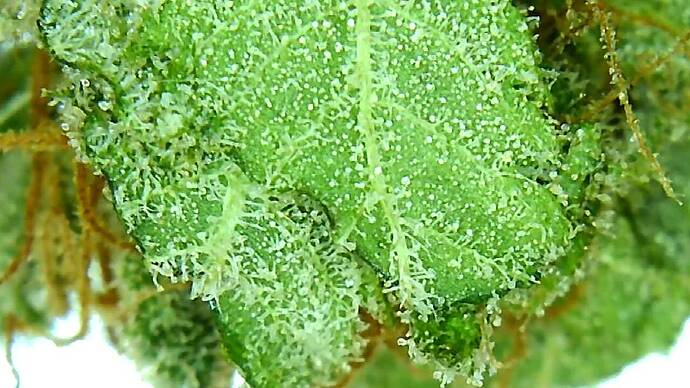 Sorry for the slow reply. I think you are ok. That just looks like some sticky yummy trichomes. I have found the PM tends to stick to the sun leaves and rarely gets into where the buds and trichomes are. Think kills the vigor, instead of ruins the bud. Toss any PM trim to the composter. If you sprayed it with milk and other soaps then the (admittingly) slightly funny look there I would bet is from that. I would say don’t share it with anyone immune compromised, but a normal person will be fine. If it taste terrible or has a real bad harshness then just compost it or make edibles. What was in your friends mold recipe? Hopefully no Chernobyl chicken shit or Fukushima mist? All joking aside I bet money what we both see there is some milk fats that dried over those frosty trichomes. (Nice bud👍).

If it was fresh cut you could bud wash it in a bucket of water with a shot of hydrogen peroxide. I think dry you will just knock off all the trichomes so don’t do that. A lot of dry climate growers or wildfire smoke smitten growers swear by the bud wash. I have heard it also removes powdery mildew. Where I live the rain does the bud wash for me, and I have to look for pOwdery mildew myself. Aggressive defoliation and earlier harvest are usually the best choices if you see it. Then ditch that one next time and try something else more mold resistant.

I know a lot of growers like to use milk, but outdoor I have all sorts of bug problems after foliar spraying milk. From mammals to bugs that are coming for the sour milk smell and not even the plants. I just use milk as a soil feed, and it’s one I like to do in the rain. Who knows, maybe I need to just try some fat free milk.? I usually just buy the whole milk.

For PM, I like to use a couple of ounces of ammonia in a standard 100ml spray bottle. It destroys powdery mildew on foliar feed. Don’t do it in the sun or lights. Early morning is best, and sunset. Indoors dim it way down or night cycle. It’s a trick I learned from an old hippy grower (RIP Peter) I randomly rented my first apartment from @ 18. He swore by it on all his pumpkins, cukes, and zukes to keep them from getting the dreaded powdery mildew. I was so impressed by how well it worked on his plants that I tried it on mine. I became a believer. It has been my powdery mildew magic bullet for at least 20 years now. I can’t stress enough it really kick some butt on powdery mildew. It works because it is highly alkaline. The reason milk and baking soda are often recommend for it as well (alkaline). The PM dies in alkaline environments.

But honestly, if I were close to flower I would just defoliate and or harvest it up early.