round three with auto blueberry. The first attempt, I used happy frog and no added nutes, and got really lousy yield. Gotta start somewhere.

Second attempt, fimmed, still grew tall, better light control, used ffof and a plug of hf in the middle. Added only one round of liquid FF nutes near the end, it did far better, harvested a very colorful, clearly aging out plant at nine weeks.

Third attempt, ffof with hf core, careful light minding, and nutes at about 2/3 strength following FF instructions as a starting point, lst to induce multiple tops, then cut loose. Still the same height We are at 59 days since sprouting, and aside from some minor suntan as the top is a couple niches too close to the light, it’s looking like it’s still got a ways to go. The lower leaves are still healthy, including the few remaining fan leaves not culled earlier. The buds aren’t showing visible trichomes yet, so we got a ways to go??? Like a month or more?

Wondering if the nutes and better light extended it’s life some? Could be inadequate nutrition sent the earlier plants into quicker maturation? Maybe I’ll get bigger buds when they do mature? Anyone know? 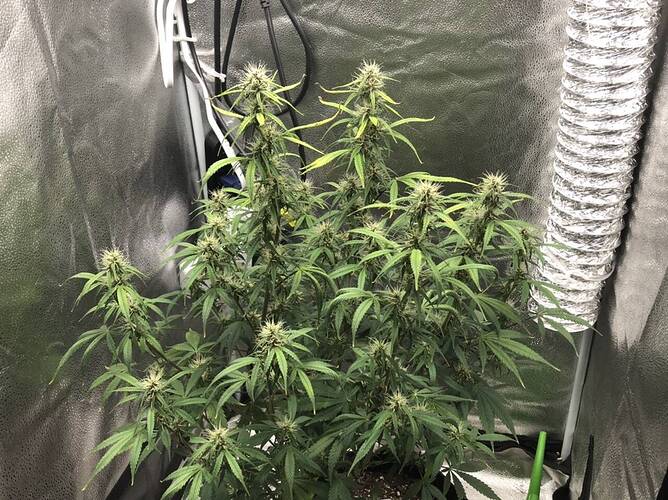 @Northcountryguy I don’t have any auto plant experience but I think I understand auto plants are bread for an exact amount time for life <90days. If that is true nutrients deficiency would shorten and the proper nutrient would allow it to reach its life expectancy…how is that for a theory?

I think it’s as good as any. First thought is an auto is actually genetically suppressing flowering tied to sunlight hours, instead going straight off hormones that develop as the plant does. So maybe the flower cycle is triggered by certain mediators being used up? If it’s really healthy, fed well, maybe they keep feeding a bit longer before flowering? Maybe it’s the stress of the plant using up certain nutes to support increasing mass, that trips it? If so, ideal nutrition might delay the flower.

I’ve not run autos yet either, but I have grown many types of veggies from seed. I’ve noticed, especially with my peppers, if I wait too long to transplant, the stress of becoming root bound can trigger flowers to develop too early, which can stunt the long term growth of the plant. It decides to put all of its energy to maturing the fruit rather than growing bigger.

I think some auto varieties are the same way. So I think you are on to something.

Exactly - it’s the same way with the peppers. Bigger plant = more fruit. I’d rather let it “veg” for the extra weeks vs having (less overall) fruit sooner.