I was wondering how should u be useong my led lights … should I keep them on veg mode while. They are small and the switch them to bloom mode when I start to flower them out… or should I use full spectrum all the time… I have a small 2 by 4 tent with two 1000watt leds … but when I had them on full spectrum my plants did t seem to want to grow very tall or fast

Having both modes on will not really effect growth at this early stage. Veg light covers the blue spectrum, assisting plants to stay short and produce leaves and branches. The RED spectrum is when the plants go into flowering mode. Some of us old timers use the RED while vegging as it increase root structure / growth. It will not hurt to have both on all the time.
If your plants are not growing, lets start finding out what is going on so diagnosis can be made by the many members here…Welcome to our community, it is what we are here for
OK, lets start with lights…Brand…2x4 tent and 2 1000w seems excessive to start unless they claim 1000w but are as EFFECTIVE AS… and how high above the plants are they
plants - what genus and strain are they - and when did you seed / plant / clone them
Substrate - describe what medium you are growing in (soil, organic / living soil, hydro)
nutrition - what nutes and/or amendments are you feeding, and ORGANIC?
how often do you water / feed
how TALL is the tent
what size are the containers the plants are in 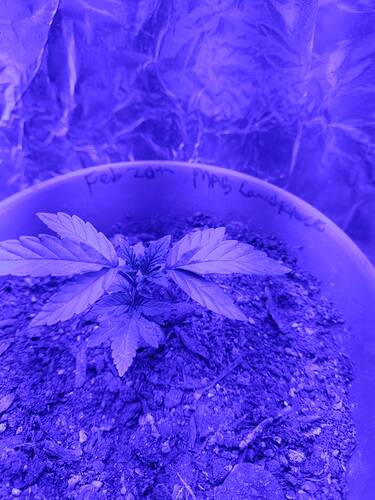 1 gal container will restrict size. On auto, you want at least 2, 3gal even better. Some strains I grow in 5gal as they really produce…Most 2 and 3 gal bags are almost the same size as the 1’s…just a little wider but taller indeed

Ok thank man… I will upgrade to 3 gallons soon

@Malcomb the king led 1000w is actually only about 150 watts of light power. About 30 watts of it goes to powering the internal exhaust fans.

You won’t get a very large yield with the 1000w. They’re designed for 1 to 2 smaller plants. They’re decent lights if you have a single plant in a 2x2. 2 of them will be good for 2 to maybe 4 plants in a 2x4 but 300 watts of total light if you run them with both switches isn’t much for 4 plants. It’s just over the bare minimum needed to grow decent plants.

I wouldn’t start upgrading your pots or soil/nutrients until you can get some more light in there. King LED works great. I have a 1500w myself that I used for autos but the 1500w is really only good for 3 to 4 small plants in a 4x4 so I upgraded it to the sunraise qb2000.

If you want to stick with king led I would suggest upgrading to their new quantum board series lights they just released and purchase them from their website instead of Amazon.

@Malcomb they’re actually decent lights you just need more light for the size of your grow space and amount of plants. 2 1500ws or 2 2000ws would work good for a 2x4 and give you about 400-600 watts of actual light.

If you go mars though the tsl 2000 or the sp 3000 would be perfect for a home grow in a 2x4 both are 300 watts but they’re full spectrum and have better efficiency etc vs the king plus blurple models. Might be worth the extra cost to upgrade over the king leds.

I haven’t tried the king led qb series yet but they run cheaper than mars. Might be an option to look into but I personally haven’t used them so I can’t speak to their quality.

@Malcomb full spectrum qb style or bar style leds are much better than those blurple lights with the switches. It’s why most led manufacturers don’t even make them anymore and have moved on to full spectrum cob and quantum boards.

The LM281b are lower quality led and in the 4k range of the spectrum. Did they include IR, UV? What driver? And double check the 600w…China Mfg’s are good for putting out some misleading info…I have China contacts and am used to dealing with them…Great prices but sometimes you gotta get past the fluff / baloney they try to pull…I have never seen anything above true 100w at a price like that. They like to insinuate that it works as GOOD AS or has PAR like but they do not…The driver model will tell you what the wattage is as will the led wattage. There are all different wattage’s of led lamps…ie 1w up to 10w…
and
If it is real, post the link for others to buy…Even shipping from China on slow boat cost more than that so there would have to be a US or Ca distribution center

@CkNugz too rich for my blood. Maybe after I’m fully professional and finish setting up my business I’ll go all American made myself.

Hard to justify spending over 500-600 on a decent light when mars and sf make lights the same quality as a 1k American light.

@MDBuds is spot on…those are high $$ lights and that does not make them the best…I designed my own 8 bar, 3112 leds of Samsung 301b (I do not need h, I am not growing hydro) and included IR and UV at 640 inverness driver with voltage control and 6 foot leads to the drivers for under $600…2.7par and ppfd covers a 5x5 for FLOWER…Many of those USA lamps are still Asian components…Like calling a car American when all the parts come from China…

California lightworks uses osram diodes which come from germany., Crecer uses samsung 301D diodes which are Korean and chinese, Phantombio makes their own diodes with new tech…, yet the company stems from china, partnering with hydrofarm now…, Fohse uses samsung diodes as well… Blackdog uses cree and orsram which is USA and german…Now that’s for LED… can also go spider farmer, sunraise, Maxisun, Mars…etc… Yet when we buy from an american company it supports our HOMEGROWN…, can always use HPS/MH lamps or Plasma lamps or CMH…, or the best thing that they all try to replicate… the

Autos like blue light in veg, full spec has red and ir in it this can cause your autos to bloom early, the sun is full spec and yields dramatically decrease outdoors, if you have a 2 cycle light run them under blue light till they stop growing vertical, flush out food check ph add bloom nutrients and flip your light to bloom only, if both lights are flipped on at same time thats full spec, you run photoperid plants under full spec bc in order to induce flowering you must cut the cycle, here is a pic of what im running 1 toofless alien and 1 unknown auto 10 days behind, so left the big plant in veg an extra II 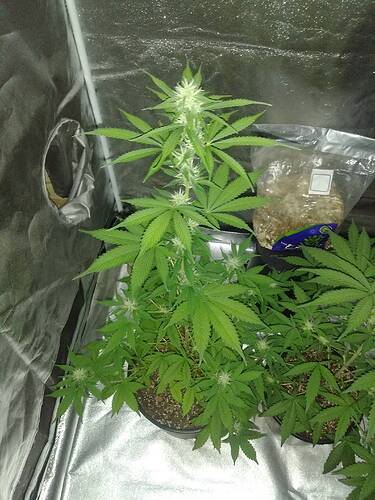 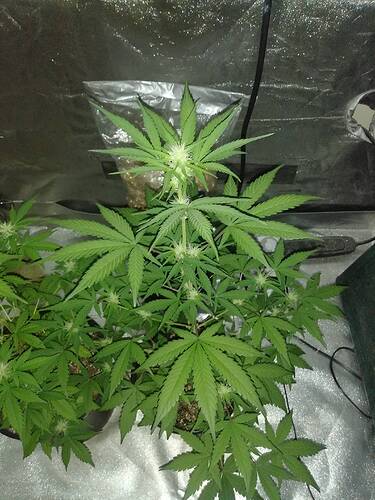 I measured the intensity of this Chinese LED. The PPFD was 860 u mol / m2 sec at 9 inches from meter sensor. This intensity is comparable to the sun on a cloudy day. On a clear day, the sun is about 2,000. Therefore, using only this Chinese purchased grow light will allow the plants to grow at a very slow rate. The on/off switch was defective and I simply removed the switch and the lights turned on. I will use these led lights to supplement my main light and be aimed at the lower canopy from the bottom.

Commenting to bring this back to the forefront for the future.