My plants are getting sick

My plants are getting sick and I’m trying to save them please help! This is the dirt I’m using and chemicals and what’s happening to my plants. Im growing grandaddy daddy bruce and purple haze femized. Any help is appreciated. 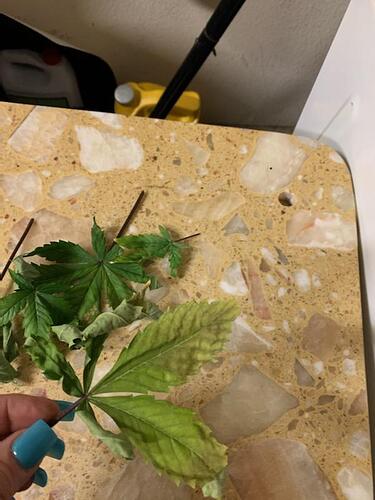 I’m no professional but it looks to me like you could have a nitrogen deficiency. It could also be your pH if it’s too high or low your plant may not be able to access the Nitro you are giving it. The range I try to feed my plants in is 5.8-6.2pH. Hope this helps some what, but I’d keep looking for more inputs from some others as well that may be more well versed than myself.
Good luck and keep it positive!

How old is this plant?
What is the Temp?
Humidity?
Looks like to much nutes. fox farm is HOT soil, What is the ratio of fox farm to other medium builders. Perilite, Coco, Happy Frog etc. Talk to us Girl. Happy St Patty’s Day

Hard look at those stems…indicative of nutrient / ph issue
so growing in soil yet using hydro nutes?
Please take some pics of the plant, closeup and in entirety
if the leaves are showing any kinds of signs, need to see while still on the plant
Looks like phosphorous issue…could be ph but either way, you are getting nutrient lock
commence with a clear water flush…2 or 3 times, let the plant rest in between and recover…don’t create an overwatering issue. Make sure the ph is good…like 6.2-6.5
lets go from there 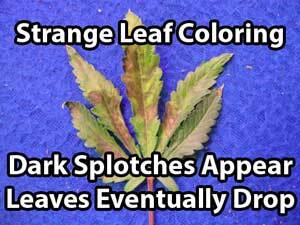 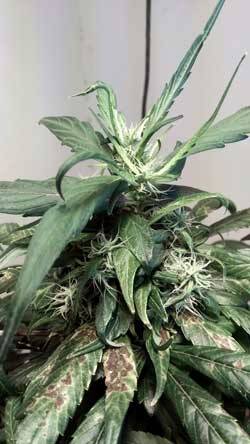 @smokebizz definitely sounds like lock out. When you use synthetic hydro nutes in a soil grow it can cause a lot of issues. It can happen with organic hydro nutes too but it’s not as common unless you way over feed.

First off, synthetic hydro nutes will generally kill all of the soil microbes. Secondly, they feed the roots directly so you will get almost instant feeding there along with slow release from the soil nutrients. This can cause all sorts of ph issues, nutrient toxicities, and lockouts/deficiencies. Then because all of the soil microbes are dead the ph won’t self regulate and adjust itself like it would normally do in soil because it’s the microbes in the soil that break things down and fix ph issues. On top of that if the ph dropped under 5.5 or went over 7.5 the soil microbe populations won’t be able to rebuild until you manually adjust ph and inoculate the soil again.

When using a soil to grow you feed the soil, not the plant. With soils like FFOF it’s better to use top dressing amendments or to use the Fox Farm nute brand designed to be used with their soil.

If using hydro nutrients it’s often better to just use a neutral substrate from the start to avoid these issues.

As for a fix, it’s time to ph and flush. Flush with neutral ph water for about a week giving a day or two rest in between each flush. Once you’re done flushing the soil should be almost depleted and you can start fresh with your nutrient schedule. Just make sure you keep your nutrient solution ph around 6.5 for soil. Don’t follow the hyrdo directions because that will cause further issues in soil. 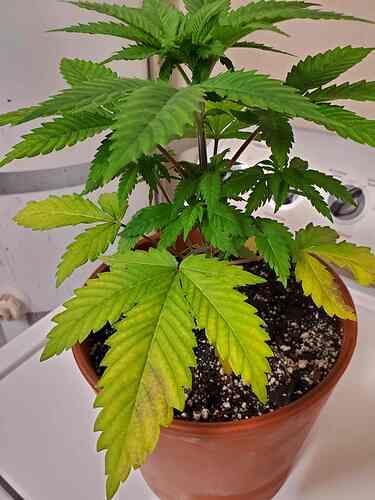 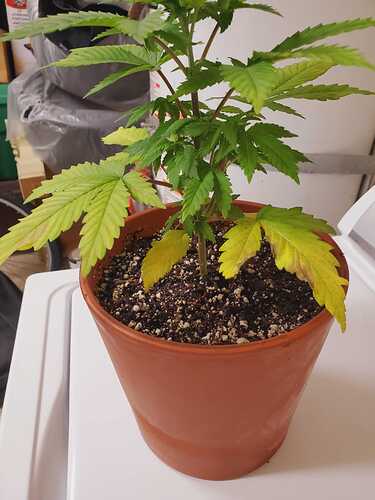 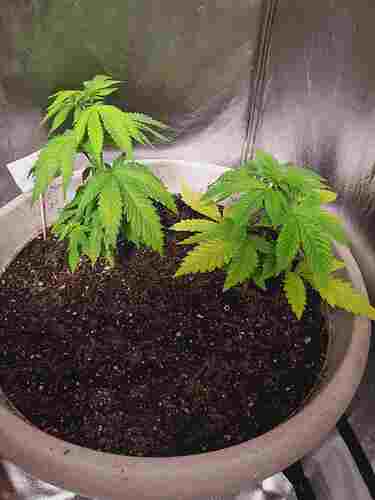 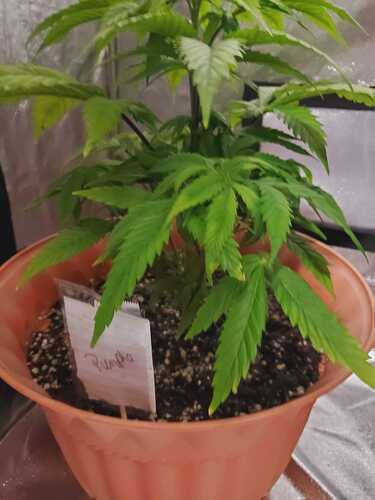 I saw the that the roots started growing out of the bottom of the pot so I bought 3 giant pots that I moved into the grow room. Just not sure what to do and got both veg and bloom lights on. They are indoor grown and thought this was going to go pretty easy but now more worried of what to specifically do to save them. But sure I won’t forget the next time I see this. Any help is appreciated and again I am a beginner. So please be specific in your responses thx all. Thx for all your words @MDBuds @Mrb53004 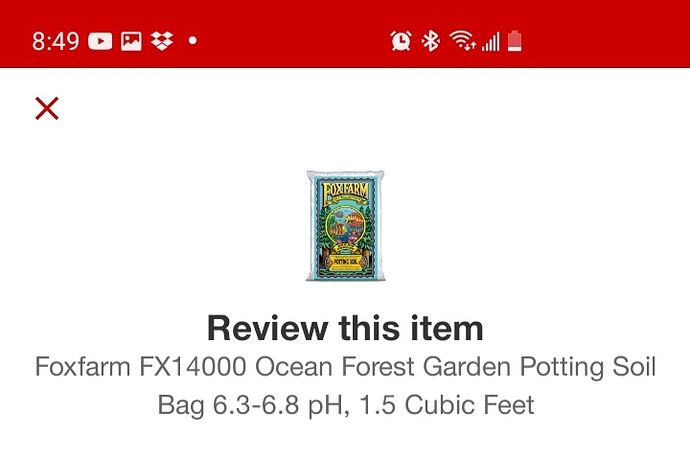 So is this not the right soil or should I go with happy frog soil at the suggested 6.2 - 6.5

@smokebizz looks like phosphorus deficiency from the lockout. Once you fix your ph and flush it will bounce back once you start feeding properly. Make sure to use some calmag in your feedings too. Remember to ph soil and feedings to about 6.5.

No need to worry about the roots growing out of the bottom. That will happen long before they end up root bound.

You don’t want to grow two plants in a single pot. The roots will choke each other out and they will compete for nutrients. It also causes the macros to deplete quickly which could explain some of your issue.

Cycling wet to dry with watering after your flush will help too. The roots will reach searching for water and expand into the unused soil that is still fill of nutrients etc…

Damn!!! Thank you for all your advice and quick response @MDBuds

@MDBuds is always spot on. Also consider that the issue is a sign of nitrogen deficiency or of over fertilization. If accompanied early by browning and necrosis of the leaf tips then you may be over fertilizing. Adding extra fertilizer when you are already over-fertilizing will kill a plant at any stage of growth so it is safer to flush the plant (if using a pot use three times as much water as your container size) with clean water to remove the excess nutrients. If this helps then excess nutrients are the problem. This could be because you are feeding the plant too much or if later in the growth cycle could be caused by excess nutrient salts building up in the soil. If this does not help then you may need to add more N to your fertilizer mix. These symptoms can also be caused by a PH imbalance.
When leaves YELLOW from the bottom up, this is an indicator…
I see more of the issue in the 1st 2 pics and Purp Haze only appears to have tips burning…
Either way, his recommendation of flushing will only help…
I do not see any flowering yet so the Nitrogen demand is still HIGH on the LIST…When you move in to flower, Nitrogen requirements lower ad the P&K take over
Check the Ph…that is paramount here (of the watering / solution) and are you using a TDS meter?

@Mrb53004 I thought nitrogen too at first but then I noticed the cal mag deficiency and the red stems and purple lines up the stalk which is classic phosphorus deficiency. Phosphorus also yellows from the bottom up just like nitrogen.

It’s likely caused by nitrogen toxicity which you can see in the nute burn and dark green leaves of the upper foliage. Which makes absolute sense seeing as FFOF already has a lot of nitrogen and the soil got doused with hydro nutes.

I was not sure if he was using the same nutes here as the first indication…The first images had a much different issue going on then the second set. I did not see the correlation…until you mentioned it

Possibly indirect light. 5.8 water gulp usually works ta start. Try a diluted wash with humate and or micros. ( pretty much the equivalent of aminos and vitamins). Rest is when they grow just like us . Nitrogen gradually! jsc