My first grow! Some questions and worries!

Its been a month since I started my first grow, I managed to deal with most of the problems that came until now myself, such as seeds not sprouting, seedlings stretching out too much and falling over, and even lost a seedling because it`s stem broke in half.

I have some pictures along with my questions!
1 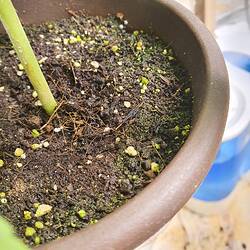 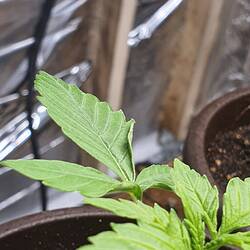 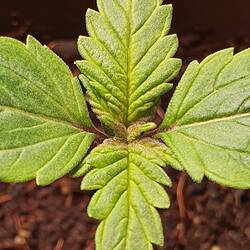 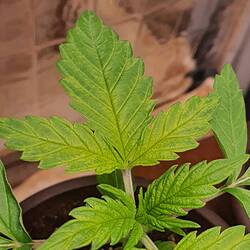 1st pic: What`s this green stuff, and is it something to worry about? Should I remove it? Fungue?

2nd pic: Some of the leaves grew curled up like in the pic in the early veg stage. Does it mean something?

3rd pic: This is one of my youngest plants, I didn`t see any stuff like what you can see on the new growth when my other seedlings grew. Same question, something to worry about?

4th pic: I`ve read something about plants getting burned by too much light, and also getting something called “light bleach”. I didnt manage to get a good pic of it due to lighting, it*s alot more yellowish in rl, basically theres alot of yellowish spots on the leaves of only this particular plant, is this due to light?

Thanks in advance everyone, Ill make some pictures of my plants today and post them in the comments later!

@New2growing I do see what looks like heat stress…so get the free app Photone for your phone and use it to set your lights by…Not sure what is growing on your soil I am DWC . If you are not doing already, start a journal to write down what you did and see each day, this is going to help you understand mistakes and what makes a difference in your setup.

Hello, sorry, didn*t think that info would be necessary.

There is one big fan running at all times, didn`t turn turn the outtake fan on yet, I just let some fresh air in to the room once or twice a day

They are in small pots right now, they’re getting transplanted in 2 days. 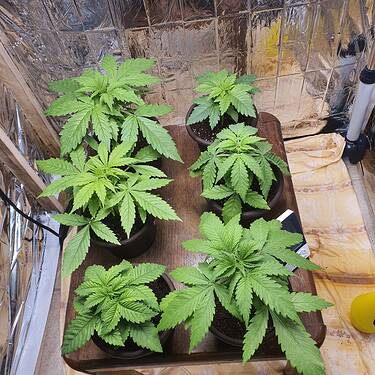 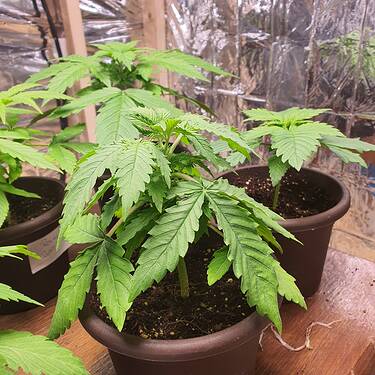 @New2growing have you checked soil pH? Your lighting and temperature is good. Rh is just a bit high. I’d shoot for 60-65% in veg.

From the information already shared and from the twisted growth on some of the leaves I’d say it’s a nutrient or pH issue.

Also, that green stuff on the top soil looks like algae. It means you’ve kept your soil too moist and you used some contaminated water. Algae and fungal infections can cause root and nutrient issues so I’d let the soil dry out too before you try to change too much just yet.

Please check your soil pH and let me know what it is as soon as you can and I’ll do my best to help get you on track.

My thoughts run with this.

I think some serious intervention now is in order or you’ll end up losing them entirely. I’d suggest first you gotta stretch the watering out. The key metric is soil moisture. Don’t water until the surface of the soil is dead dry, and you’ve gotta scratch down 1/2 inch or so to feel dampness. Water around the stems in what you imagine to be the root ball. No sense watering where they can’t reach. That promotes nasties like algae.

The slumped leaves are suffocating because there is too much moisture everywhere and it can’t get its evaporation/circulation going. There has to be a moisture gradient, evaporation to move water and O2 and CO2. They don’t have hearts or lungs. I’d make sure lots of air moving. Keep ‘em waving so they’re not stuck in dead air.

Thanks, I think the RH is a big part of what I got wrong, I saw it go up to 80% sometimes, but I didn’t worry too much about it. I’ll make sure to keep it around 60% now! Also yeah, I did water daily because I read that soil should never be let to dry out, had a feeling that when the surface soil is dry, the rest of it is too… :// Is there an amount of water I should be aiming for when I water? (coco coir)

coco is sometimes too high in PH if the mfg did not wash it thoroughly. Many coco providers got cheap and do not wash their coir and that results in Ph issues. Either spend to buy a better brand or soak in distilled water to FLUSH the salts (from the areas where coco is produced - usually near beaches)
stretch - common when lights are too high
in early stages, lights should only be 20-25% strength
if the stems get weak, crumble paper and place around the stems to support them. Easiest and cheaapest method to support them
sprouts like a little breeze, it helps the stems get stronger. Closer lights (lower strength) and sometimess a little silica (sand - make sure it contains crushed quartz) to assist in the substrate

@New2growing alright here’s what you need to do since you’ll be transplanting soon anyway.

@New2growing also, check coco like you would soil. The top dries out faster than the rest. Stick your finger in about two inches down and compare the feeling to a wrung out sponge. Literally get a dish sponge and wring it out as much as you can until it no longer drips when you squeeze it. That’s about the moisture level you want before you water again.

You can also do the squeeze test with coco until you get your finger feel on point. Move the dry top soil out of the way and grab a small handful of coco under it making sure you dig roughly two inches down and then squeeze it in your hand. If water drips out it is too wet. If it feels like the wrung out sponge you’re good to water again.

Eventually you’ll be able to go by feel just from the weight of the pot but the methods mentioned will help you a lot until you gain more experience. Coco will feel heavier because you will need to water to slight run off daily but it shouldn’t be dripping wet when you go to water again.

Alright, haven’t been able to get on these past days. I’ve done what you said @MDBuds . Thanks alot, after the transplant, my plants are finally starting to grow again, and look alot happier. Only thing I’m still worried about are these leaves that started yellowing and kind of getting burnt. This was before I had a chance to transplant them. What could have caused that, and should I remove those “dead” leaves? Thanks again guys, you saved my plants! 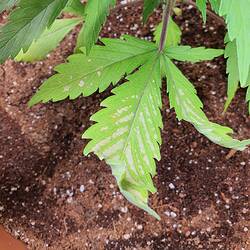 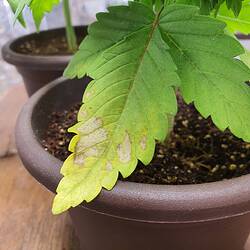 There are a number of different causes for it, but in your case it was nutrient deficiencies caused by pH lockout.

Since the other growth is now healthy and growing fine you should be OK just cutting off the dead/dying leaves.

Just make sure you keep an eye on all of the new growth to make sure it keeps coming in healthy.