I know that deficiency usually shows up in the leaves but are isolated misshapen leaves generally filed under “sh!t happens”?

This plant has looked nothing but healthy since sprout. This morning I noticed 2 leaves have bi-lobed tips. This is 2 leaves on the same branch that has typical leaves both before and after.

Is this just a benign abnormality or caused by stress (i have been tucking fan leaves regularly to open canopy and doing some LST)?

Or some deep coded mega virus clawing its way out of the DNA that I should take as a sign and kill the beast before it is unleashed on humanity…sorry my quad espresso just kicked in. 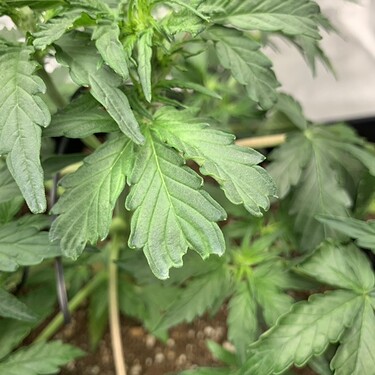 I don’t have an answer to your question, but I would welcome a cannabis-based deep coded mega virus, the world could use something like that…

My gut tells me ya dun squished a stem and blocked circulation to part of it. Kinda like when a cow has trouble delivering a calf. That calf end up the one that licks the electric fence.

I have leaves like that on some of mine, no biggie. I had a seedling start out with leaves like that, I named her Stevie, as in Tyler. Ugly duckling, but is growing into Stevie Nicks, well rounded and plump!
It’s still green and converting sunshine into energy for the plant. Wouldn’t worry about that leaf. The leaf behind it at about 4 o’clock has some curl on it, I’d be more curious about that one!

@OhanaFarmer looks more like a pH issue than a virus. Sometimes pH fluctuations can cause some weird growth because the plants aren’t getting enough or too much of x nutrient but it usually corrects itself and they grow out if it.

Doesn’t really look like a viral or bacterial infection though so you’re good there.

Although rare, it could also be an issue with copper and molybdenum deficiency. That’ll cause young leaves to do all sorts of weird stuff and grow in twisted and contorted like what we’re seeing here, which is generally cause by pH issues as stated above since those deficiencies are rare like I said.

Check this leaf out! 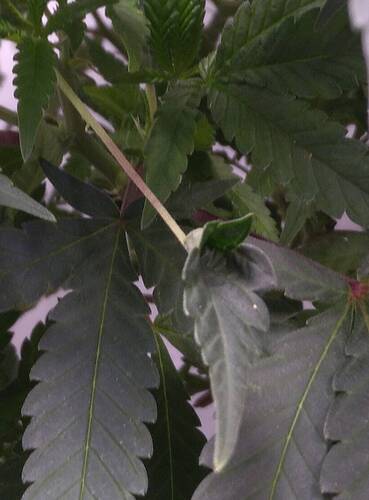