Is this nutrient burn or a deficiency 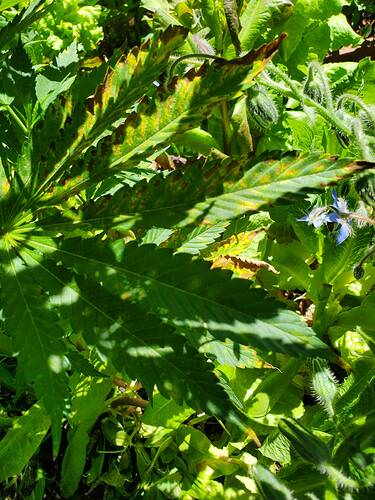 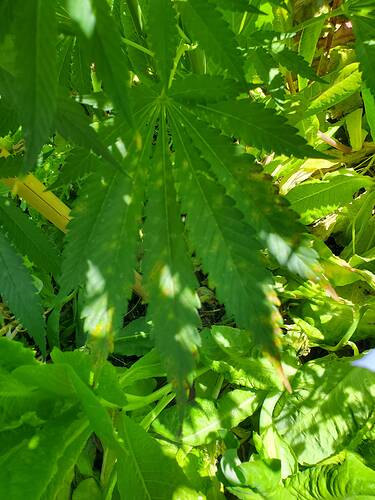 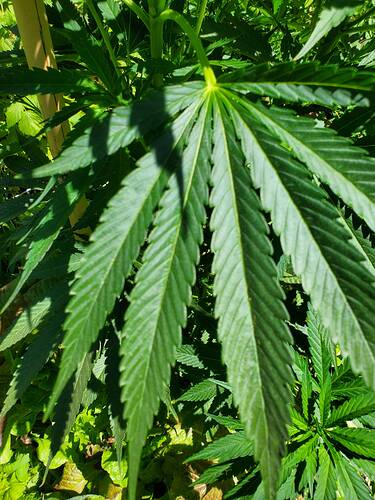 These are out door 11 Roses in a buildasoil 3.0 mix in a 32 inch tall 42 inch wide birdies metal raised bed. My lowest leaves are showing burning and rust/yellow coloring. But as you move up the plant it goes away and everything looks fine.

I also have 4 other plants, different strains, in the same soil mix showing no problems. Is there anything I can do, should I just ride it out?

Any diagnosis or advice would appreciated.

Hi, I would check the soil temp and soil ph in the metal beds compared to the wooden beds. Also, are the beds close together or in different sections of your property with shaded areas?

As you can see it looks happy until closer inspection of the lower leaves. I also have a living mulch consisting of lettuce, strawberries and radishes

My PH as per a blue lab soil pH pen was low 7s. Between the 6 beds my highest was 7.2 and my lowest was 6.8. I was under the impression that PH was more or less irrelevant when growing outside in the ground.

On hand I do have a rhododendron soil acidifier and fertilizer. It is mostly organic sulfur and some other ingredients

As for location the plants are all near each other and more or less shaded by the same trees. There is a large redwood directly to the south of my garden. It used to cast a shadow mid day but now that the sun is higher In the sky the shadow no longer reaches these plants. Beyond that I have trees to the west, they shadow and give filtered sun during the last two hours of daylight

looks like a phosphorous issue. That does not necessarily mean deficiency as heat can prevent plant from absorbing nutes. Have you been giving any calcium?
You can try lowering water temp of feeding to 60°f…add some kelp (to help withthe heat and make sure you aerate the water first)

What kind of phosphorus issue, too much, not enough?

Other than the nutrients originally mixed in the soil. Being the buildasoil craft blend and the L.O.S. V3.0 mineral mix. It had not seen any nutrients, so no I have not fed it any calcium.

Here are links to the two products I mixed in my soil. BuildASoil Craft Blend started with a big workshop full of the best and cleanest soil amendments available. I quickly became spoiled and would use all of the BuildASoil ingredients together and in different combinations that aren't available here...

I intended not to feed them until flowering time at which point I would be hitting them with phosphorus. Do you think they need a feeding, which includes phosphorus?

I’ve not been gifted with an opportunity to grow outside yet, but take a look at the close-ups. I see a moisture problem, but I’m sure these folks with more experience can correct me. 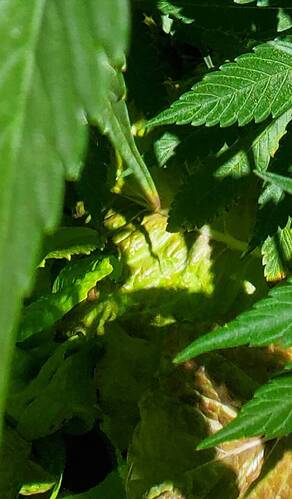 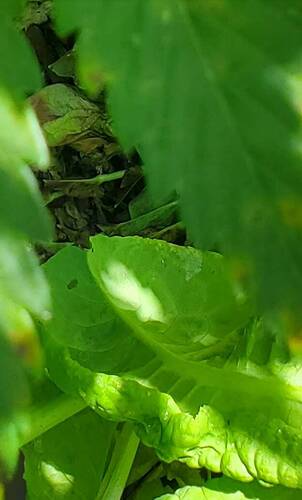 @kmac03 I believe what you are looking at is my living mulch lettuceor radish leaves underneath my plant. It’s started to bolt, flower and is starting to seed, it is in kind of bad shape right now…

Though maybe you have a point the condition of the lettuce could be a precursor or related to the cannabis issue. Kind of like a canary in a coal mine.

It might just be something that creepy in that one area. You know what you are doing. If it were me, I’d probably remove that from the area and see what’s hanging out. I found a large festering bug full of maggots once, I guess he/she died doing a deep dive in or something. It was the culprit for something similar.

@RaiderZ28 what metal is this raised bed made out of?

If the issue is only affecting the lower leaves and the new growth is healthy it is a mobile nutrient issue. This means it is either nitrogen, phosphorus, or potassium.

I’m not seeing any of the purple stems or stalk that comes with phosphorus deficiency and the way the chlorosis starts at the tips and edges then works inward it looks more like a potassium issue.

To me it definitely looks like a potassium deficiency issue likely caused by the heat and PH. I’d lower the ph a bit if you can to try and get it around 6.5. There’s not much you can do outdoor about the heat but you can increase heat resistance in raised beds by feeding with some kelp and silica. They both help with stress recovery and prevention.

The metal your bed is made out of may affect things as well.

IMPORTANT: Pre-orders are currently closed. Please join our email list to be notified the second we release more beds for order or pre-order. We are restocking as fast as we can! Ordering Guidelines: If you see... Add to Cart: The...

I think my plan is to hit it with a little kelp meal for potassium, fox farm cavern culture for phosphorus, and Epsoma soil acidifier to try and get my PH closer to 6.5. I also have azos, makes and kangaroots.

Good gravy. Throw the suitcase, why don’t ya?

Aluminum and zinc leaching, as @MDBuds stated, can also affect your plants. Of course, I’m just crazy, so take it with a grain of salt. Start with wet material, it’s how I started on bodies, anyway.

@RaiderZ28 yeah zinc and aluminum can leach into the soil and affect your grow so that galvinization coating they used could be a culprit as well. How long have you had it? There’s a safe food grade powder coating on it to prevent the leaching but I’m not sure how long it holds up and will last outdoor because it’s proprietary and I couldn’t find much information on it.

From my understanding of what I read though you should be safe from any aluminum or zinc leaching until that powder coat starts to wear down.

Be aware, when the oxidation occurs inside, below the soil line, you usually cannot tell if the coating has degraded. If you want to continue, I would recommend if you re-compost the soil, lining them with a non porous material to prevent leeching. I would much rather have esters from poly or other plastics than heavy metals / salts

I’ve had the bed since November and previously grew Chinese giant leaf mustard in it over the winter. I transplanted my cannabis into it outdoors in late april.

As far as recomposting the soil, I’m not sure that is plausible at this point. My plant is +/- 5 ft tall and I know it has a ton of roots.

How would I go about doing that with a plant that size? Could I just water the shit out of it and basically flush it?

At this point though I think I’m just gonna hit it with potassium and phosphorus to try and address a possible deficiency and hit it with sulfur to drop the PH below 7. As these two beds read 7.2 and 7.1 ph.

: As a second thought these two beds are the smallest of my 6 with the least volume of soil. If it is a deficiency, and has nothing to do with leeching it might be likely to pop up in my other plants in the coming weeks.

Chinese giant leaf mustard in it over the winter.

Asking for knowledge. Would the mustard not have eaten all the appropriate nutrients since cannabis and mustard are similar in nature?

Sounds like treating for a deficiency may be the easiest of all things…Always chose the path of least resistance, least effort. Can always do more later
FYI, here are a few pics to maybe help with defining what, if any issue there is
Calcium Deficiency = 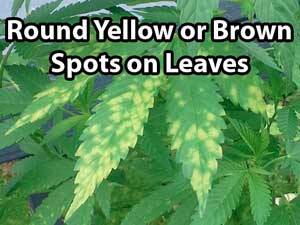 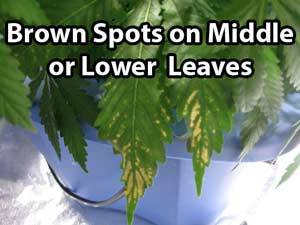 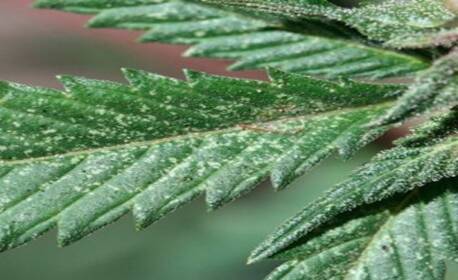 I have seen this from Wind burn 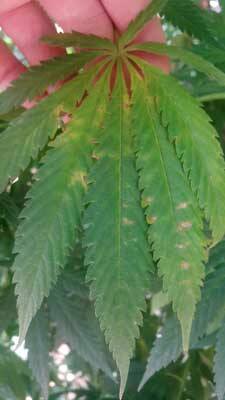 If it is only 1 plant and ONLY lower leaves, maybe a little defoliation is in order here
I do not know the age or if in flower but either way, slight defoliation does not hurt. Never do more that 30%…and alsways wait 3 days for recovery. If new growth is good, Maybe best to leave her be

@kmac03 That’s definitely possible. I’m kind of new to the gardening and growing cannabis thing, still learning. This is only my 2nd year. I picked it up trying to survive the boredom of the Covid lock downs and not being allowed to go back to work.

The way things worked in my head was that if there were any issues like my soil mix being too hot, then it would show up with the mustard crop. Though maybe it is that logic and train of thought that is biting me on the ass right now.

I am hopeful that this is simply a deficiency. I figure these plants have been outside in this soil for 7-8 weeks now. If it were something serious going on I think it would have manifested sooner and to a greater degree. Though we will see I guess

New pictures? I’m trying to refresh my brain with a new image. I’m new to gardening, too. I swear I had a lesson on growing mustard and that’s why it’s stuck. I’ll try to remember to look it up. Might be acidity is what I’m thinking. I don’t have my laptop anymore, so I’m starting fresh with trying to figure out how to get back into my classes via phone. Thanks for the dialogue! I appreciate it.