Ok so trimming and putting in jars last Sunday I had 1 stem that had a couple of branches and a large cola that had small sacs at the bottom of the cola. I decided to investigate a little and found two more little pollen sacs. Good news is only the smaller buds right below the cola had developed seeds. I’m not mad, now I got about a dozen beautiful seeds that are going to get germinated in the spring. I’ve been trying to figure out how only the one branch on 1 out of 6 plants got stressed. Thought maybe the 48 hrs of dark on December 6 or the ice mulching did it but really not sure. Guess next time I don’t do a partial harvest.

@Kojak I don’t think you would be happy with the plant those seeds will produce. I have seen what they produce and it is never a quality plant.

I was wondering if the self preservation would affect the genetics of the strain. Im not wasting indoor space and time on them but may put outside somewhere just to see what happens. Time to W&B 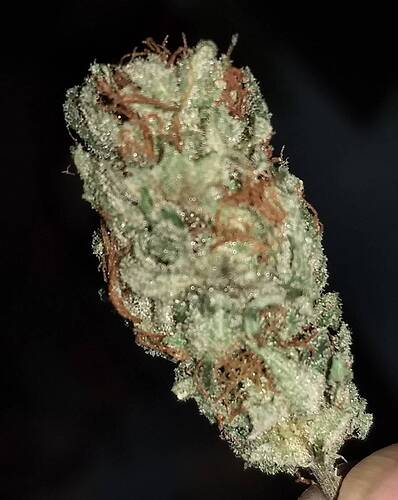 @Kojak,
That’s a beautiful bud there.

There is no reason not see what it does next season. Especially if you are low on seeds. Unless you plan to run anything else at the same time. Then I would not risk it. There is too much good stable stuff. Definitely don’t breed w it on purpose. It’s an ethics issue more than science. I think, or I am too high on kief maybe.

I think the risk in growing them is that the intersex trait is very dominant. It would put all the offspring down the family tree at risk for hermaphroditism. It would be a shame if you created a gem

of a cross and it hermaphrodites all the time. It is a hard trait for anyone to breed out, that is why it stays around even in the best pedigree lines sometimes. I personally don’t breed when I know it’s a hermaphrodite. You described it perfect.

that had small sacs at the bottom of the cola.

I have found true intersex plants to be just a few male flowers low on a node. At the bottom of the main cola or low nodes (maybe1-2 stamens per group) in small groups. Below fully devolving female flowers. Not in them. Often at the first main nodes where we first preflower the plant. These fully develop and have petals and drop lots of pollen and if not pinched make lots of seeds. Real cross pollination meaning stamens and ovums.

In contrast, bannaners or nanners, are more or less Rodelization. Meaning self fertilization. An ovum over develops in the upper half of the bud, I found often at the tip. (These are never below the bud or at a node.) They self pollinate without any Y chromosome. True feminized seeds. Usually the nanner has no petals, it just looks like a banana because it’s a stretched ovum. Think phallic. They often release no pollen at all. [just like some femmed seeds reversed moms are stubborn about pollen.] Or very little compared to a fully developed male or herm. So these nanners usually produce few seeds randomly deep in the bud. If male pollen had dropped those buds would be fully seeded everywhere. So you find a precious few seeds compared to the seeded out herm. But the true test is when you grow then. I find them to be female just about every time. Those seeds are the weed gods gift to you

If you grow them alone (herms) and pinch the male flowers you can make some nice bud and minimize seeds like you did. Did you pinch the male flowers off early? If they opened up and you only had a few seeds they could be femmed gems. Just maybe don’t breed with them on purpose, or don’t give them away until u play with them more. Not to totally contradict myself. Only u know if you got them early, or after they opened. If you saw a dusting of pollen it was probably after.

I have yet to find a strain that I could not over flower and stress (Rodelization) into making nanners and seeds. I have tried so many seeds over the years and have been able to get nanners every time. I think (hypothesize) it’s the plants built in escape hatch if left out in nature and without pollen for seeds. Otherwise it would be harder to do. Sorry for the ramble, I got real high on kief today.

I found them after 14 days of drying as I was trimming and putting in jars. I only noticed when I was cutting it from the main stem, and had trimmed the sugar leaves off. I cut about an inch up and found a couple there as well. Those were more elongated than round. Maybe nanners but real small. I should have kept them. I’m curious to see what they do this spring. Thank you but that’s not even a pretty flower. I’m still figuring out the trimming technique. Super sticky the closer you go it seems. Bigass scissor boogers make it hard to get a few snips in a row. They sure are good to smoke on afterwards though. 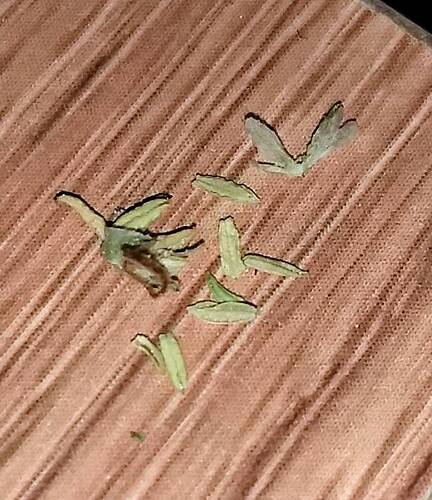 @Darodguy here’s a pic of mine.