Should I be doing some kind of trimming or stress training? I did some low stress training by gently bending some of the growth out of the way. Other than that, I think she looks healthy. Am I correct in assuming that I am looking at around another 3 weeks of veg? I have only done two feedings so far and I used about half of what was recommended. (Pride Land Veg)

Hi there I did a few runs of Green crack and she’s a tall girl. Plan on her doubling in height during flower. Also bud is very dense so I put her in tomato cages second run. Also she likes phosphorus during flower. Happy growing. 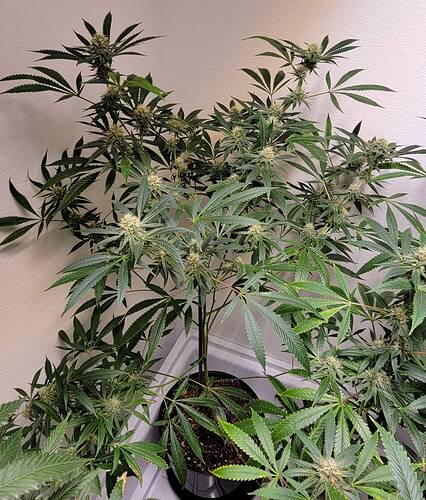 Wow! Thanks! Was yours pretty dense at 5’6 weeks? Did you do HST on yours?

No they put on weight that last month. I really just did Kushman chiropractics and kept the bottom 1/3 of my branches clean and it works. Also tried to cut off all the sucker branches early on. That’s hard for me I always feel bad cutting off pretty healthy branches.

Are the sucker branches the smaller of the two branches coming out of one node?

The nice thing about a photo as you can keep it in veg for as long as you like. I would just let her alone for a week looking at pic and allow her to put on some growh. As long as you have all the tops you want just let her grow and maybe clean the lowers about a week before flipping. 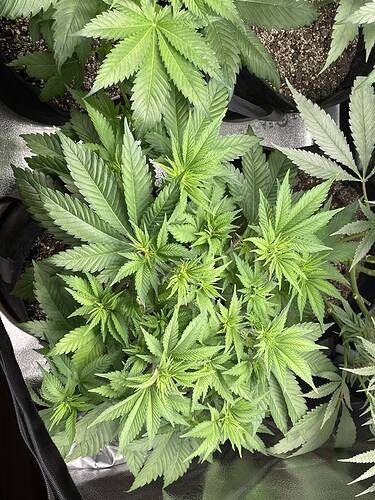 This is a Steve’s dream queen (green crack) that was stunted after beam drop on 3-6. I’ve held it in veg almost two months now and will probably put her to flower in the next two weeks for a crazy long 2+ month veg.

3 more weeks put you at 8.5 week veg which some say is long but for a photo it is whenever she is ready and depends how big you want her to get.

The small branches at the bottom of the plant that won’t get enough light to really produce anything good. But will take away energy that can go to the larger branches. I look at it like pruning a tree. You don’t want a shrub. You want a well groomed tree like looking plant.

They are not sucker branches and will all grow quality flower if provided enough light… For most indoor setups it will be tough to get enough light 4-5 nodes down from the top of canopy without side lights. I prefer to clean all the leaves and flower nodes except for the top 3-5 depending on the final look of the plant going into flower… Most people refer to it as “lollipopping”… Some people leave all the flower spots all the way down the branch. Most people that employ the lollipop method believe your yield and quality is increased by forcing the energy to the tops. I personally lollipop everything and that works for me and my setups. the flowers too low that don’t receive enough light will lack development and be squishy little popcorn buds and not as heavily covered with trichs as the top buds… And i’m probably never smoking those anyways and would be too embarrassed to give it away. So cut them off before they even get started in flower.

Thanks, mine nowhere looks like a tree, more like a bush. I guess I should be doing this now instead of later?

I’ve been reading up on cleaning the plant up and I will look into lollipopping more. Thanks for your input. Your plant looks nice and healthy. Have you already trimmed the lower leaves? I was thinking I had another 3 weeks or so to veg.

I just did the Dream Queen and the others that will be flowering with her (Super Lemon Haze, Golden Goat, and Ghost Train Haze) and then I will do two indicas in another tent but I want to do a super long veg with them. 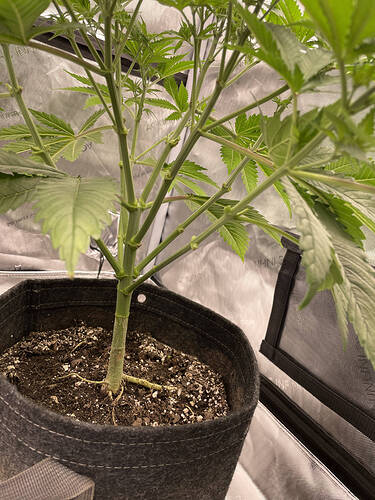 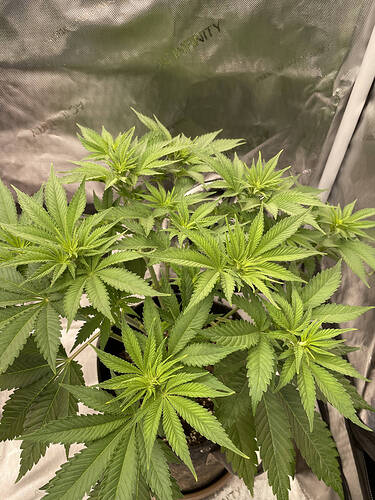 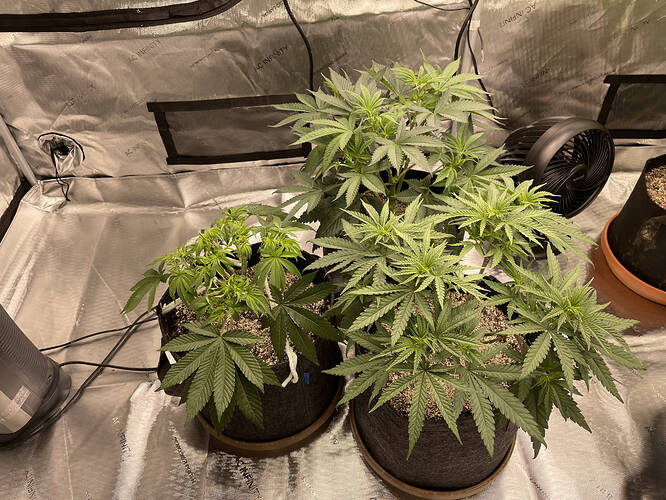 The SLH was a super squat plant all the way through veg… Mostly my fault because I wasn’t pruning and training enough (although she’s been pruned 3x the others in her group). I finally lost my patience and spread her tight ass out a little and gave her a massive trim. I will hold that one in veg an extra week but she will grow everything back by Tuesday she bushes so fast. Her nodes are so tight I was going to cut even other node instead of the lollypop but did it anyways so well see how she looks during stretch and I may cull her as her twin that was stunted is coming along good now and has much better spacing in the nodes.

It looks a bit extreme but by mid flower it starts to looks good… Below is my current grow (Sour Diesel day 39 from flipping to 12/12… Has about 35 days left or so. Generally I aim for 32 tops but have done less or double depending on how many i’m growing. I only used the trellis net to train during stretch then I gently removed it as I want the branches swinging right now. If I have to tie a few up in a couple weeks so be it. And frankly I don’t care if a couple stalks break I just need this plant to finish and get out the way. 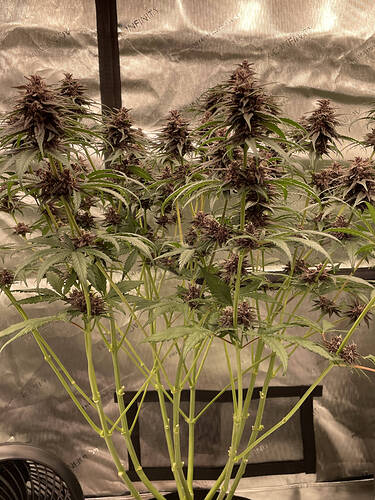 Your plants look really clean compared to mine. All I have done so far is LST and I believe the light is getting good penetration to the whole plant. Am I correct in assuming I should have mine trimmed, or lollipopped, about 2 weeks before flipping? Thanks for the info.

I generally do the pruning and top dress about a week before and make sure they recover well…might be a 5-10 days for me.

Clone the branches you take off !

lol I do but sometimes there are just too many. Then it makes me sad to scrap them.

Should I be getting ready to flip or give her another couple of weeks?

Omg that is a beautiful plant.