This year I want to grow some massive sativas by getting them in the ground as early as possible. My plan is to start indoors germinating at the end of febuary in a grow tent and move them out doors around april 15th. At that date there will be 13 hours and 16 minutes of daylight. The strains I have are moby dick and Buzz light gear, my growing zone is 9B in California

My co worker says if I plant that early they will go straight in to flower, then re veg and it will ruin my plant. I’ve read grow journals of others growing, moby dick specifically, and planting in the middle of april no problem. I am just looking for advice on how to pull this off without hurting my plants. Things I am considering are following:

Any advice, links or thoughts would be appreciated that might help me out.

@RaiderZ28 this depends on if you are using regular seeds or if you are using feminized seeds. Regular seeds will have more pheno variances and some will be more sensitive to lighting changes than others. Feminized there will be much less pheno variance so if you test one or two in your grow room before putting them outside you will be able to see if they will flower and reveg or stay in veg.

Moby Dick is one of my favorite sativa dominant strains to grow and I have started indoors and then transplanted outdoor with great success myself. I always did an indoor lighting test first though before putting them outside.

The only time I have ever had issues is my first regular grow where 50% flowered under 13 hours light and the rest stayed in veg. I just culled the flowering ones and bred the ones that didn’t so they’re less light sensitive and haven’t had a single issue since then.

I’ll probably start some outdoor Moby Dick along with my Agent Orange this spring as well.

I have feminised seeds. Maybe I will grow a few extra plants and cull the weak and what flowers and also test 1 at 13hrs

@RaiderZ28 I’ve had plants start flowering at 14.5 to 15 hours of light, when they were outside, so I would not recommend starting them outside that early. If you do put them outside early, I would recommend putting a light out and having it on for an extra 2 or 3 hours a day so the plant still gets at least 16 hours of light. Anything less than 16 hrs, you will be taking a chance at early flowering and then you may have to re-veg it, which can cause unnecessary stress. I had that happen to a Skywalker OG I grew 6 years ago and i re-veged it and it ended up being a very finicky plant the rest of the grow and didn’t produce nearly as much as all the other plants I had. I always wait until at least June to plant outside without using any extra lighting. Example- My CBD Cream and Cheese started to flower third week in July, which is still almost 15 hours of direct sunlight where I live, and the rest of my plants started flowering between 13 and 14 hours of direct sunlight.

Marijuana plants can grow really quickly, and if you do start it in February and wait to put it outside until June, you’ll have a very well established plant with a strong root system and a nice fat trunk.

Another thing to remember is to acclimate your plants to direct sunlight from the very first day they sprout up. I always start mine on lights inside my grow room and take them outside before I go to work, then put them back inside when I get home from work. They will not stress as much when you eventually put them out outside permanently.

Last year I put mine outside on April 27th and topped it a couple weeks later. It turned out great. 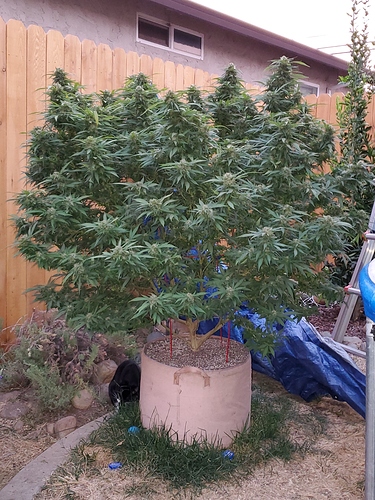 I usually wait until May. I generally find seeds seem to know it is time to grow and not flower in the spring. Specifically if you start them in January and February. That said, it is so easy to keep them in so why risk it.? In the extra month you could top them once and all ready get them bushing out side shoots.

But clones, seem to overwhelmingly get confused and go flower crazy if too early in the spring. Even when I carefully match my indoor lighting schedule to outdoor hours. It’s like they are just waiting to flower. Definitely wait till May if you are using clones.

I grow my harvest outdoor. Winter clone keepers indoor. And pollinate outdoor all winter long in the greenhouse with extra clones and the best males each year.

That is a beautiful plant Jonathan Henderson

Thank you. I learned alot from that plant. I have some more seeds from that strain but im not growing her this year. I started 4 wedding cake seeds about a week ago for my outdoor grow in my backyard. So far so good. I just need to stay out of there way.lol I’m using a new soil this year that I’m really excited about. I’ve been learning about living organic soil. I found the soil king and his new product Big Rootz. This stuff is so amazing even uses pumus stone instead of perlite. Micro organism love this stuff. Im really trying to do things different from here on out as I’ve learned that foxfarm really isn’t a good product. It’s just popular. I have my seeds under a 1000w led on veg. It’s about 28 inches from the top of these little girls. I have a weaker light that I’m wondering if I should be using for the seedlings. What do you think about lights for seedling.

My goal is to keep them under the light for this whole next month and then hopefully they will be strong enough to start introducing them to the outside some time in April. I know we have a long growing season here in the Butte Valley