Has anyone used this device? I think it would make things a bit easier and maybe less smelly. Although I really don’t care about that it’s other people who I live with that make a big deal of it. Any thoughts or opinions would be appreciated.

I have the Ardent Nova Decarb.I mostly use it to infuse coconut oil with my cannabis. I use it for cooking, making gummies and on occasion put drops under my tongue for pain or put some in clear capsules and take them too go.
I checked out the link you left and it looks really comparable, I like that it has a digital temperature display and the price is $100 cheaper. As far as I know Ardent has been on the market quite a few years and I love it! One last thing if you want to infuse oil u will need a silicone cup from Ardent that’s about $25-30 I hope this helps!

The Nova Decarboxylator is our flagship unit that fully activates THC & CBD in your favorite bud. It's odorless, mess-free & easy to use. Get it today!

Buy it you won’t regret it

I have a decarb box from magical butter machine and it works but I find that I constantly have to open the box during the process to cool down the temp in the box, maybe some of that is my oven but there doesn’t seem to be a sweet spot where the temp is consistent. I just placed my order and time will tell how it works. I have the large ongrok machine for infusions and that machine works great, I had considered the levo machine since it does both decarb and infuse, but decided to go a slightly less expensive route. Even buying this decarb machine I will still have spent less than one levo machine.

I made infused butter the other day for the first time. I viewed a few different methods, then gave it a try. Using 2 sticks of butter and 5 grams of my Gorilla Glue #4 flower, made the butter. Yesterday I made some brownies with it. It called for 1/3 cup of oil, I used 1/3 cup of the butter. Way over did it!!! an 8x8 pan cut into 16 pieces. 1/4 of a piece and I was wackadoodle… So I guess I need to practice a littl lighter dosing…

@Woodrat I did the same thing, I used an ounce of trim and popcorn buds and infused 4 sticks of butter, but the butter mold that came with the ongrok machine are bigger than the original butter stick size so I ended up with like 3.5 sticks of butter, the recipe I used called for like 3/4 stick of butter and I said nah I’ll just use the whole stick, well I made a small sheet pan and made some rice crispy treats but used fruity pebbles in place of rice crispy cereal and I cut them into 24 even pieces and decided I would eat the little pieces I trimmed off which totaled about 1 full square. I was gone, like with your brownies you really only need a 1/4 of a square to be feeling irie for several hours. I also made some tincture with about an ounce of the same trim and popcorn buds and then reduced it to concentrate. Added it to some chocolate and made some little candies, the were so incredibly strong, just licking the spatula when I was done floored me. 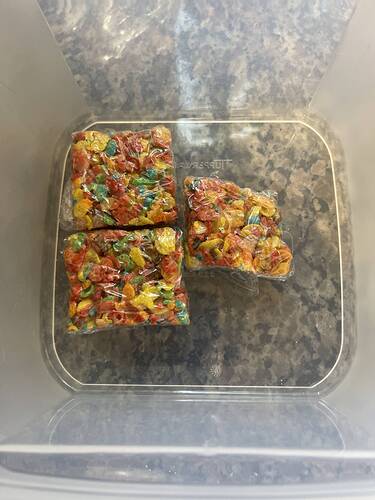 @jjress okay, you sold me on the fruity pebbles idea

. More practice till I get the mix right

@Woodrat it’s definitely worth the experimenting.

I use my instant pot to decarb and make butter with no smell perfect decarb.

Lots of videos on YouTube and a lot of recipes if you search “ decarb instant pot “
What I do is basically follow the main recipe plus I use slow cooker at the end.
Ok here we go. I have a 6 quart instant pot. I use a big canning jar. Not tall but wide. I use 1/2 oz. ground up cannabis. I put a trivit in the bottom of pot. I tighten ring on lid pretty tight. Pour water up to about 1/3 no more than 1/2 way up the side of jar. Put on the lid and cook at high pressure for 40 min. While that happens I melt 2 sticks (1/2 pound ) of unsalted (high blood pressure) butter or gee if I make some. I also mix in about a teaspoon of sunflower lecithin to help emulsify and at the end of 40min. I quick release the lid put on my oven gloves, pour butter in put back in ip for 20min. at high pressure then I switch to slow cooker function for 2-3 or even 4 hours while it’s hot it’s easier to pour through a very fine mesh strainer into a short glass container then into the freezer or frig. I save the leftovers in the freezer and get 4-6 batches of leftovers and cook them again in a pan of hot (not boiling) water with a little extra butter and am always amazed at how strong it can be. Cooking it a 3rd time seems to be pointless but I have tried several times. Wow! Um…… I guess that’s all?

My 93 year old father and 80 year old mother both have buttered crackers before bed. I make a batch every week. Use good butter and decent cannabis. No smell and more oils and terpenoids get into the butter (is my belief) and the herb doesn’t dry out the same when it’s sealed in the jar. After the butter goes in I put the lid on really tight to avoid burping butter into the slow cooker water( but if you do you can still save it just chill it and the butter will separate. Lots of ways the instant pot is a great multi tasker. It’s high pressure setting is almost the perfect decarb temperature. Sorry to make it so wordy. Hope it helps. You can also infuse MCT oil or coconut oil or olive oil the same way. I buy shake from my dispensary and grow my own. A lot of times cannabis that I don’t like to smoke will make excellent butter.

The same decarb machine that was being asked about is now on sale with $40 off regular price. I snagged one.

I decarb my herb with the Activation 420 decarboxilator, that I purchased from Amazon. I swear by it. I also bought their Infusium 420. The two devices have worked like a charm. I make the best edibles, with little effort.

I gathered up about an ounce of shake/trim, will that turn out worthwhile to make a couple sticks of butter? I just couldn’t throw it out