Hey, folks. So I’m curious as to where I go from here. The attached plant is 2 months old and seems to have stopped growing, or at least growing as fast as it once did. It seems too small (13") to go 12/12, ̵i̵f̵ ̵t̵h̵a̵t̵ ̵i̵s̵ ̵e̵v̵e̵n̵ ̵w̵a̵r̵r̵a̵n̵t̵e̵d̵ ̵w̵i̵t̵h̵ ̵a̵n̵ ̵a̵u̵t̵o̵-̵f̵l̵o̵w̵e̵r̵. But would someone explain what I should do at this point? What I should look for maybe?

Edit: Not an auto-flower 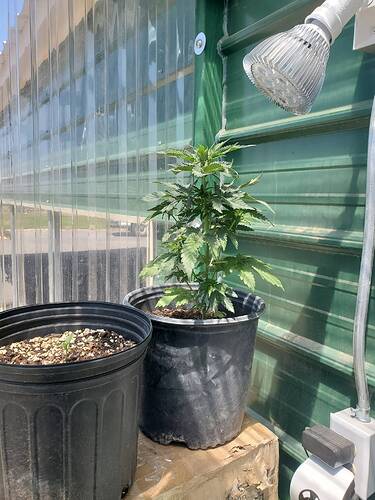 what strain is it? The light, what spectrum is it? Autoflowers bloom based on hormones, not amount of time under light / dark. Photoperiod flower when we FLIP - go to a 12/12 schedule. You can veg almost forever, that is what is done with MOTHER plants. Then clones are cut. I had mothers that were 2 and 3 years old and still vegging…
Stress can stop growth, as can nutrients, watering and container size.

“Autoflowers bloom based on hormones”. Ok, how does one determine hormone level of plant? I’m trying to determine where I stand with this plant. What do I do now if not just wait longer because the plant looks immature (to me).

Try repotting it and see if the extra room allows the plant to grow even more.

The light is a very low level light. If the BLUE spectrum is deep blue, It can make the plant stay SHORT. You do not determine the hormone level of the plant, that is done by genetics. You can manipulate it if it is a photo period plant by restricting the light to 12 hours a day. If you can get 12 hours of TOTAL DARKNESS, within 2 weeks it should begin to flower.
Do you know or suspect the strain? Do you know the temperature of the environment? If it is > 80°f, you can restrict growth. Looks like plastic barrier and the container next to a dark wall. If the soil or leaf temperature is too high, that can affect growth.
2 months old is not that old, especially in a photoperiod plant. We normally begin veg mode at about 3 weeks and veg for 7-10 weeks to desired size, then we FLIP (restrict light to 12 hours) to INDUCE flowering. We keep the DARK stage at 12 hours to continue flowering till harvest. Temps should be around 75°f day, 60-65°f at night…These are guidelines…plants will grow outside there parameters. Sometimes it just needs a little Nitrogen boost to get things going. DO you use and nutrients / additives?
All in all, the plant looks very healthy, goo color, good internodal node spacing…DO you have a larger pot to translpant it to? We want to make sure it is not rootbound

Thanks, Mike. Yeah, probably the heat. Sun is strong in TX and that greenhouse is made for winters, even with its front door open - as it always is now during days. I’ve had other vege’s croak from its occasional >100 heat but I’ve assumed this weed was saved by its larger container.

I use standard 10/10/10 and bone meal for weed and other vege’s. This plant looks pretty healthy to me, except for its size @ 2 months (again, though, what do I know).

Because it’s been veging for 2 months, and i thought I read that’s about right, I would have liked to just turn light off at night because we’re at 12/12 now and 13/11 in a month, but I’ll take your advise and move it outside the greenhouse for another month and then build a box to cover it for 12 hour nights. I should build box 3x size of veged plant? Thanks.

Edit: Even as close as it is, did you suggest this light isn’t doing much at all? It seems bright enough and the plant is directed towards it each morning.

Here is my 2 cents (for what its worth…lol)
Get a larger container. Place some kind of insulation between the container and the dirt to stop radiant heat. Also, try not to use DARK containers as they absorb heat from sunlight
You have enough sunlight to veg the plant so continue
Believe it or not, you can build a simple BLACKOUT box from cardboard box/es. Just make it large enough to go OVER the entire plant without obstructing the tips…Place it over the plant at 6pm, remove it at 6am…or any hours close to that. You want SUNLIGHT and COMPLETE DARKNESS…no peeking or night lights, etc. Whatever works - 8-8…as long as you get 12 hours darkness…
10-10-10 is great…after flower you want to see if you can reduce the first 10 but do not worry about it. The P&K *second and third 10) are enough to carry the flowering
You may not think the light is doing anything but deep blue is feeding the internodal growth and stout shape of the plant, keeping is short, which is usually a good thing
The SUN will give it the red spectrum it needs for flower
When we get to flower time, you water with cold water and that will kick things off…like 60-65°f
Remember, size does NOT always matter…it is going to be the quality of the buds that matters. I would rather have an ounce of great weed over 3 ounces of junk weed

It’s worth a bunch. 9 other people have viewed this thread and not one has raised an objection to your words.

No need on larger outer container. I’ll just transfer pot outside of the greenhouse.
“10-10-10 is great…after flower you want to see if you can reduce the first 10”. That’s bone meal. Perfect.

Couple of questions:
“Just make it large enough to go OVER the entire plant without obstructing the tips”
I read how the flowering stage increases plant size 3x. Is that not correct?

“When we get to flower time”
That was my original question: When is flower time. Based on your 2nd reply I’m now figuring 12/12 starts one month from now, but is there something on the plant I should look for, an “I’m ready” signal?

the READY signal is when YOU, only you, think it is time to FLIP. As a photo, you can veg it as long as you like. It is 40% Indica | 60% Sativa, a short, compact plant. I would expect total height to be between 3-4 feet…maybe taller outside. Figure 1 and 1/2 feet STRETCH when it goes to flower so figure your BlackBox size from whatever the plant is at FLIP and add 2 feet to cover. Figure 7 weeks flower time on average

I would not cover it at all. The sweet spot for autos is 18/6 or 20/4 the whole way through. No need to drop the amount of hours of light. It will stretch alot while it’s flowering. Even at the size yours yours is at right now it will continue to stretch a couple feet in the next month or 2. I’ve been able to get them almost 4 feet tall in just a 3 gallon pot. Im pretty confident your auto will get big here pretty quickly

If I correctly understand, it is my choice if and when I want to 12/12 this strain? so if I so chose I could 12/12 this plant tomorrow?

If true, I’d prefer that because 1) I’d have buds in a couple of months from plant shown 2) I have another seedling I would let grow and mature naturally.

yes, it is your choice when to FLIP. I do not think this is an AUTO

was following this, confused if its auto or photo?

he stated is is Critical Blue…not Critical Blue auto…2 months (8 weeks), if this were auto it would have had flowers by now

I agree with you guys. 8 weeks is along time for an auto not to be flowering