@P-Tree I’d say you got a special plant my virtual friend! 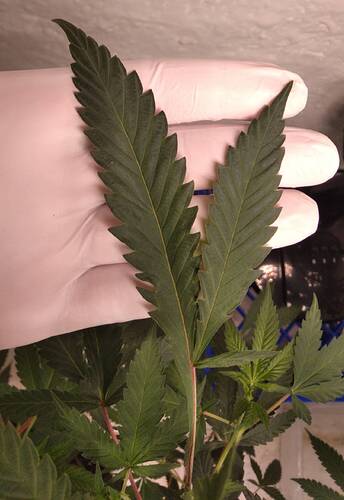 My super skunk from RQS was doing that last time. Again I ain’t ever seen anything like that, a ol timer told me about somethijg called rabbits foot. And the buds were just, nothing basically. And I had that one outside.

I can probably find some pics gimme a min.

I couldn’t find any but yeah. I had leaves splitting like I’d have a 4 set but it’d be one set if that makes sense. Again nothing I have ever seen before. It was probably error on my part but I went with living soil and bone n blood meal that’s it. Genetics maybe.

I made some clones of my previous run. They were doing awesome until the cops chopped em down.

Anyways, one of them consistently grew 3 sets of leaves (and 3 new nodes) at each node site. All the branches themselves grew normally though. It developed a really nice even structure.

Once the plant gets to a certain point in maturity, it doesn’t necessarily produce pairs of nodes anymore. It’ll have like single, alternating nodes. So I think it’s luck of the draw a bit genetically. Sometimes you get 3. It might just be the one branch that’s like that though.

Sometimes people have more or less than 5 fingers per hand. Are they still good people?

That’s the thing right there. We are caught between accepting the oddball, evaluating it on its own, and comparing the plant to an exemplar.

Yes, if enough people were to suddenly favor the odd petal leaves, theoretically we could change the expression expected from a plant. It’s how we got tender, yellow corn fit to eat as picked.

That’s a good insight. Thank you. This is my second grow inside so every little bit helps. I’m use to growing outdoors so. But thank you.

With every grow comes experience. Enjoy the journey