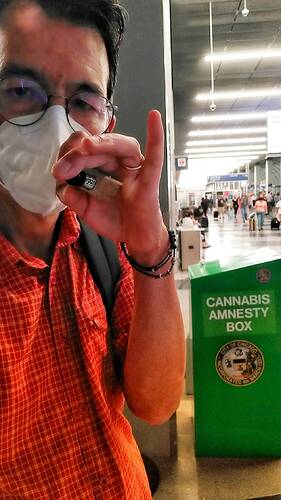 Can you get some closer pics? I want to see the base of the container near its root zone.

I am laughing my ass off on this. I remember getting drafted back in 1970…I enter boot camp and there is a similar container. Well, me being who I am , got almost a half pound out of it. I made sure to have kp duty as the chef and I smoked, ate cherry pies and peeled potatoes…

Well, me being who I am , got almost a half pound out of it.

That’s what I was thinking. Those airport employees gotta be like “Suckers! Thanks for the free weed!”

A buddy of mine won this radio contest - got into the final round and won the grand prize- pair of tickets to go see Bills vs Jets in NYC on New Year’s Day. We stayed in the same hotel as the players it was really cool.

Anyway, I had a 1/4 ounce of dank on me plus some prerolled joints in a cigarette pack. It was my first time through an airport since 9/11. So we got up to the security checkpoint and I was totally ready to take a bathroom break and flush it. My buddy’s like “no fuck that give it to me” and puts it in his shoe.

So we’re going through the checkpoint. This is after that shoe bomber guy so they made us take off our shoes. Now I’m shitting a brick. Luckily he had put in in his sock and he was basically walking on it so they never found it.

Anyway, we smuggled it all on the plane to NYC and then back again (checked it in the luggage on the return flight).

Thats one of my favorite weed memories. We had a great time - best pizza I ever had in my life.

I have always traveled with reefer. Once only a (pre-TSA) security screen found my wooden dugout and one hitter. She asked what it was. I said, “marijuana”. She laughed and gave it back to me.

These O’Hare boxes are stupid. Weed is legal in Illinois, so arriving folks don’t need to worry, there is no check when you leave the airport. And departing passengers have already made it through federal security by the time they see these boxes which are on the concourses. So no one will be depositing anything in them, there is no logical reason to do so. 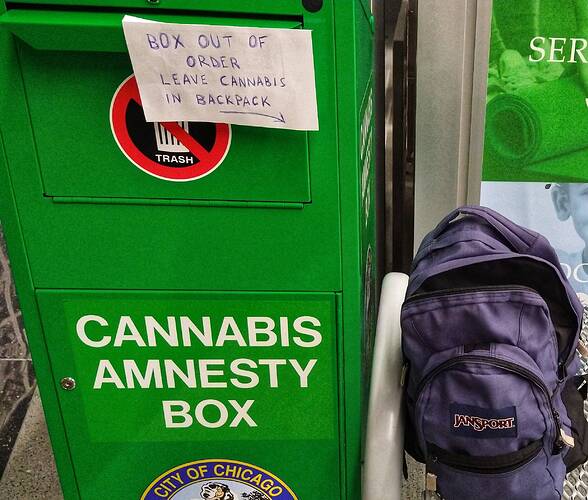 Catch a ride back home yet?

I ended up spending the night in O’Hare. They stopped all takeoffs and landings for hours due to weather, tons of flights were cancelled, including mine. Finally got out yesterday, arriving home at 3pm. All I had was a decent load in my vaporizer, which I finished. I did put the spent vape crumbs in the box…