Add on photos of discoloration

Here is another photo I was speaking of 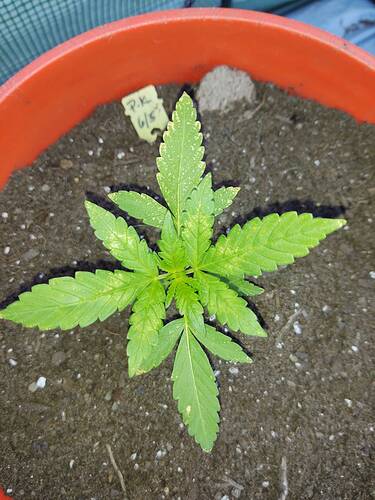 Did you spray something on them during lights on? Also, my eyes are old, so…

Na just watered them on Monday 6/14

How did you water them? Are you indoor or outdoor?

Dennis,… did you SPRAY your solution with said WAND? If so, please see the first question above to include timing please, and thank you.

Were the lights on when you sprayed? If so, then I would make sure you spray during just before lights out so the lights won’t heat up the water droplets and burn your leaves. Make sense?

@Dman this looks a bit like leaf septoria to me aka yellow leaf spot. It’s a common fungus that leaves spots on the leaves and they can range in color from yellow and light tan to almost a dark brown. It usually starts on the under sides of the oldest leaves and spreads from there.

I mention this because I looks like it’s affecting the older leaves much more and has just started in on the newer leaves.

Would it be possible for you to take photos of the under sides of the leaves so I can be 100%?

@Dman I also see what looks like fine webbing from mites so it could possibly be a spider mite infection. A few good photos of the undersides of the leaves will help a lot in diagnosis.

I think spider mites too, the webbing by the stem. Septoria tends to look evenly sized and spaced throughout the leaf. Think salt sprinkled on fries with the yellow dots size and distribution. Most of Those yellow dots near the margins are uneven size. It Just made my gut go spider mites. Like I blurted it aloud as I read the post. But the webbing by the stem is the proof. It’s Easy to fix on lil seedlings like that so all will be well. I light dish soap (couple drops in the water spray bottle) or horticulturist soap spray every morning and night (hit the tops and bottoms or they just hide under the leaf).

But it also could be that a plant with the light Septoria infection could also be more easily attacked by spider mites and have both going on at the same time. I usually just fix Sephora with a foliar feed. I used to use milk spray but have switch to diluted ammonia now days. The ammonia gives the plant leaves a good nitrogen feed (ammonia reduces to nitrate when exposed to the air and the leaves soak in the extra nitrate). But do this only at night or before dawn. In the sun WILL fry your plants. Or lights off indoors. It evaporates in about 20 min. The main reason I switched from milk is because none of the bugs seem to appreciate being blasted in the face with ammonia that’s what I’ve noticed. I’ve even added a couple drops of the dish soap to the dilute ammonia and water with good results when I’ve seen spider mites before.

Milk works great too. Milk has a whole Lotta other things in it that help the plants. Like lipids and amino acids and trace vitamins. Milk is mother nature‘s gift to baby mammals. Plants like it too. But the reason ammonia and milk both work for foliar feeds that ALSO kill infections, is that they both have a high ph. Both work great on powdery mildew, as well as septoria. I have used baking soda and water but I think the ammonia works better since the leaves get a N feed too. The other reason I use milk less is that I mainly grow outdoors. My problems go from bugs to little mammals getting into my plants when I spray them with milk. The mice or rats will almost always chew on my stems and leaves when I use milk outside. I have used milk plenty of times indoor. I guess that’s why I mainly use ammonia now. To compare the two products as foliar feed that also kill infections.

Hmmm. I have never tried a milk ammonia combo. I wonder if the ammonia causes the milk to coagulate into cottage cheese curds. Maybe not since they both have a high ph less chance for a denature of the proteins. Maybe the little mammals will leave it alone it’s ammoniated first… I will try it sometime and let you know what I think.

have never tried a milk ammonia combo. I wonder if the ammonia causes the milk to coagulate into cottage cheese curds.

Wouldn’t that depend on the temperature? I wouldn’t think to keep ammonia enclosed, right?

I would just mix them as need at use time. The milk would make for a short shelf life.

High Temperature and strong acids and bases denature (cook) proteins. Even weak acids can do it. Think lime or lemon juice to cook scallops in Ceviche for example.

Yo thanks for the info both of you what is the dish soap and water ratio will apply in the morning also are these. Mites visible with a loop thanks again like I had previously stated this is really my first controlled grow had always grown in the wild with minimal plant interaction for security reasons thanks again everyone who replied

In a standard 1,000mL spray bottle I usually add 2 to 3 drops of plain dish soap. Like the kind for hand washing dishes if you have no dishwasher. If you have any interest in trying the ammonia I add about an ounce to an ounce and a half a regular grocery store cleaning ammonia. To the 1000mL bottle. Lemon scented cleaning ammonia is fine. I often cannot find it unscented.